Jack Archer (All Chapters)
Marina Romanova (Darkness Descends 3)
O Deadly Night is a case featured in Criminal Case as the one-hundred thirtieth case of the game. It is the fifteenth case of the game's World Edition (Season 3) and also the third case to take place in Eurasia.

On their way to the COSMORUS' outpost, Lars suggested Jack and the player to stop at Lake Baikal to see the lights. However, they found the frozen body of maintenance technician Nick Kringle with a bullet wound in the chest.

During the investigation, Nick's reindeer escaped from his house, jeopardizing the investigation. It was also revealed that Jack and Mossad spy Asal Hawaa were in a relationship. Later, Lars got stuck in Nick's chimney and had to be rescued by the team. Furthermore, Asal revealed that Nick was a CIA agent going undercover in COSMORUS before the team found enough evidence to prove her guilty of the murder.

After denying involvement, Asal admitted to the crime. She improvised an ice bullet and killed Nick with it following Mossad's orders, as they believed that Nick was up to something dangerous. By virtue of the relationships between Mossad and the court, and understanding that Asal had to kill Nick to keep international security, Judge Adaku granted her immunity for the crime.

Post-trial, Marina and the player talked to Asal about the reasons behind why she murdered Nick. Asal said she was ordered to neutralize Nick before he could sell CIA's intel to a third party. She then pointed them to Nick's house to look for clues. In Nick's house, they found a check to the order of Santa Inc., a company that Nick had founded in a tax haven to receive payments from Global Flux Ltd., per Elliot's analysis. Knowing that Nick had been working for SOMBRA, the team asked Forrest Sugarcrystal, his partner in the CIA, who did not know about Nick's betrayal and sent them to the lake as Nick used to spend time there.

In the lake, the team found a phone with a folder called "Darkness Descends", which (per Elliot) contained a satellite hologram. As the satellite corresponded with the stolen launch codes, the team deduced that SOMBRA was planning to launch a satellite into space.

After the team got bar owner Dominika Snegurochka's famous eggnog recipe for their Christmas party, Elliot discovered that Global Flux Ltd. had received 3 billion rubles from the former Russian president (the one who paid Jonah to assassinate Marina). He also tracked some of their payments to Mongolia, prompting the Bureau to board the Trans-Siberian Express to the country. 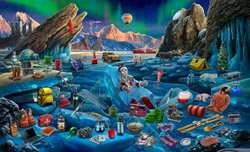 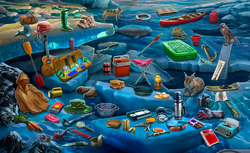 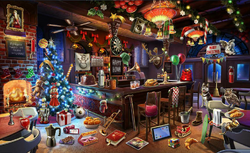 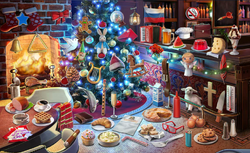 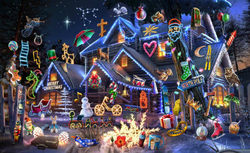 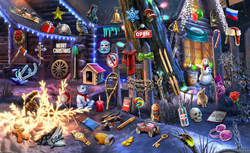