Nyota Adhiambo was the killer of her ex-boyfriend, safari guide Kariuki Maina, in The Circle of Death (Case #38 of World Edition).

Nyota is a 35-year-old wildlife protection ranger. She has shoulder-length black hair and a scar across her right cheek. She dons a black dress underneath forest green and saffron brown ranger's uniform with a matching caramel name tag, a silver necklace and a wristwatch on her left hand and is seen carrying a rifle on her back. It is known that Nyota is knowledgeable about plants, eats nyama choma, and has navigational skills.

Nyota was first interrogated when the player and Jack found her walkie-talkie on the crime scene. She was surprised to hear of the murder, and said she saw him taking tourists when she was on her patrols, on one of which she lost her walkie-talkie. There was not much else she could say about him other than he found his clients at a nearby lodge, prompting the team to continue their investigation there.

Later on, she helped Jack and the player get out of a wildebeest migration, which they got stuck in while discussing their leads on Kariuki's murder. Nyota was interrogated again about a photo of her and the victim. She admitted that she and the victim had a fling, but she also said she did not know that the victim was married. Despite the similar interests, she left him the minute she found out that he was married. When Jack brought up the victim's elephant poaching scheme, Nyota was shocked and angry, saying she was now definetly not sorry that he was dead.

At the end of the investigation, it was revealed that Nyota was Kariuki's killer. After denying involvement, Nyota admitted she killed Kariuki. Because she loved the victim, she told him everything she knew about elephants while they were dating. Later on, she discovered that he used the knowledge in order to kill elephants to sell their ivory tusks. Feeling betrayed, Nyota shot Kariuki with a poisoned arrow. Judge Adaku sentenced her to 10 years in prison. 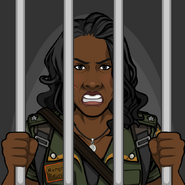 Nyota, sentenced to 10 years in jail for the murder of Kariuki Maina. 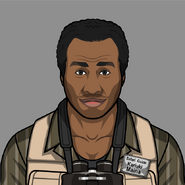 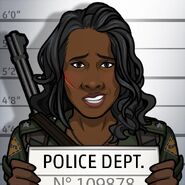 Retrieved from "https://criminalcasegame.fandom.com/wiki/Nyota_Adhiambo?oldid=437495"
Community content is available under CC-BY-SA unless otherwise noted.