Prof. Norah Barnlow was the victim in Breaking the Glass Ceiling (Case #13 of Mysteries of the Past).

Norah was an architect assigned to the creation of the Crystal Palace for the World Exhibition. She had black hair in a pompadour hairstyle and dark brown eyes. She wore round glasses, a silver necklace, and donned a long brown skirt and light pink shirt under a beige blazer at the time of her death.

Norah was found impaled with glass shards inside the Crystal Palace. A cut rope next to the victim and a hole in the ceiling led Maddie and the player to deduce that a glass pane used to build the roof was the murder weapon that killed Norah. While the body revealed nothing to Dick, the coroner managed to deduce that the killer cut the rope with their right hand, which meant that the killer was right-handed.

Norah was the architect assigned to the construction of the Crystal Palace. Under pressure from a dissatisfied Mayor Cornelius Castletown to finish the project in time, Norah forced the builders to cut corners, angering several of the workers, including Gus Smiffel.

Aside from being the head architect on the Crystal Palace project, Norah was an architecture professor. Norah failed one of her students, Henrietta Vanderbilt, who struggled during her exam due to her father's recent death. In her spare time, Norah developed a friendship with journalist Katherine Woolf. However, Norah broke off their friendship after Katherine made a romantic advance on her. Norah also requested help from Chief Inspector Eleanor Halsted, claiming that her life was under threat.

The killer turned out to be Henrietta.

Henrietta initially denied involvement but soon admitted to the crime. Her father had been competing against Norah to be in charge of the Crystal Palace. When Mayor Castletown gave Norah the project, Henrietta's father could not stand the defeat and committed suicide. Angered and saddened, Henrietta cut a rope suspending a glass pane over Norah's head, crushing her. Judge Takakura sentenced her to 30 years in jail. 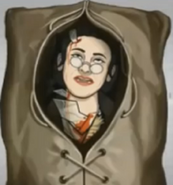 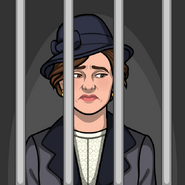 Henrietta Vanderbilt, Norah's killer.
Add a photo to this gallery

Retrieved from "https://criminalcasegame.fandom.com/wiki/Norah_Barnlow?oldid=490872"
Community content is available under CC-BY-SA unless otherwise noted.