Noah Richards was a suspect in the murder investigation of teenager Freddy Stewart in In the Dead of Night (Case #18 of Grimsborough).

Noah is the 39-year old head of security of Greene Holdings with short black hair and green eyes. He is seen donning a black suit over a white shirt. He also wears a tie and a phone earpiece. It is known that Noah is a smoker.

Noah was called in by Jones and the player to see if he knew about the robbery in the Greene's mansion. He said that he was smoking outside when he saw two kids running out of the house through the window. He also said that he started running after the two kids but lost them when they reached Cooper Park. When asked if he could identify the two kids, Noah replied that he recognised Freddy Stewart, since he had seen him several times in the neighbourhood, but could not identify his partner. Later, Noah was again called in by the team to talk to them about further details of the robbery.

He was found innocent after the player arrested Julian Ramis for the murder. 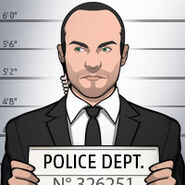 Retrieved from "https://criminalcasegame.fandom.com/wiki/Noah_Richards?oldid=442695"
Community content is available under CC-BY-SA unless otherwise noted.