Noah Lowe was the victim in Summer of Death (Case #6 of Travel in Time).

Noah was a festivalgoer at the 1969 Woodstock Festival. He had thick, curly brown hair and dark brown eyes. At the time of his death, he wore a brown jacket lined with white fur over a brown square-patterned shirt with triangular buttons. He also wore blue denim jeans and brown shoes.

Noah was found dead with his head bashed in, slumped against a hippie van at a camping site in the 1969 Woodstock Festival. After autopsying the body, Janis told Zara and the player that Noah died of severe blunt force head trauma and that his killer had thrown him at the van with their full body weight. Furthermore, Janis also found traces of granola on Noah's body although there was none in his stomach, meaning that the granola came from his killer, allowing Janis to deduce that Noah's killer ate granola.

Noah was a typical country boy living with his father, farmer Alfred Lowe, on their farm. Alfred disapproved of Noah hanging out with the hippies at the Woodstock Festival and later threw him when Noah announced that he had fallen in love with another man. The man in question, poet James Henderson, met Noah at the festival, introducing him to a whole new world. However, he felt overwhelmed by Noah's strong feelings for him, expressing his true feelings when Noah bought bus tickets for the two of them for New York City.

At the festival, Noah met rockstar-in-the-making Ian Devine, who signed an autograph for him. However, he tried to convince Noah to do drugs with him, resulting in Ian freaking out in the middle of an acid trip and Noah abandoning him in the process to run away and confiscate Ian's drug stash. He also met fellow partygoer Janis Rivers (a 13-year-old hippie at the time), who stole money from him, as well as army recruitment officer Major Perkins, who tried to convince him to join the army, although he believed in peaceful resolutions instead of war.

The killer turned out to be Perkins.

Upon admitting to the murder, Perkins said that she had mistaken a car backfiring for gunshots. Perkins then tackled Noah, falling against the van. However, the impact had killed Noah. The team then handed her over to the Army. Marina then told the team that she had disguised herself as a police psychologist and explained Perkins' condition (post-traumatic stress disorder, which had not been officially recognized as a disorder by then) to her superior officer, who promised to rehabilitate her while she served her custodial sentence. 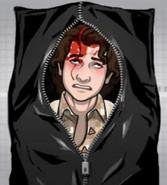 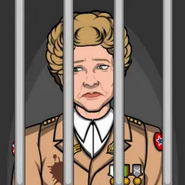 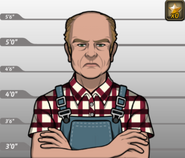 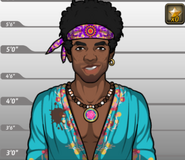 James Henderson, Noah's boyfriend.
Add a photo to this gallery

Retrieved from "https://criminalcasegame.fandom.com/wiki/Noah_Lowe?oldid=490857"
Community content is available under CC-BY-SA unless otherwise noted.