No Leg to Stand On is a case featured in Criminal Case as the twenty-first case of Supernatural Investigations (Season 7) and the three-hundred forty-third case overall. It is the first case to take place in the East.

The team continued their search for Rathimael's human identity and the fifth key in Philadelphia, Pennsylvania, where Chief Arrow and the player were informed by Gwen that she had found a body at a boat dock near the Highsmith University. Gwen and the player then collected the body of university student and rowing team member Eric Prynce, stabbed in the stomach with his legs eaten off.

Mid-investigation, Luke asked for help dealing with Eric's roommate, Italian student Marcello Campiano, who had heard about the murder and was freaking out at the crime scene. They then later discovered that the university mascot Johann Zeit was in fact a two-hundred-year-old revenant after discovering his alive head locked inside a globe and helping him reunite his head with his body. Soon after, Felix told the team of a freak-out in the campus library about the murder, which Gwen and the player managed to calm down. They then incriminated marine biology student Muriel Cove for the murder.

Admitting to the murder, Muriel confessed that she was a mermaid, telling them that she was in love with Eric's girlfriend, sorority president Vanessa Sadler, after Muriel saw her while swimming by the dock. Muriel then sought the kraken's help in granting her wish to walk on land in order to confess her love to Vanessa, only to be rejected by her, nevertheless. Muriel then begged Eric to break up with Vanessa. However, Eric refused Muriel's beg, making her angry and kill Eric with a dagger. Muriel then fed Eric's legs to the kraken as a payment for helping her turn into a human. The team then turned Muriel over to the authorities after the latter confirmed that she would face the consequences as a human.

After the arrest, Gwen and the player questioned Johann about Rathimael, who advised them to consult his diary that had been lost on the university docks. Felix then told them that in several of Johann's entries in the years leading up to the millennium, he had mentioned someone called "The Pilgrim" and the powers they had, suggesting it was the same demon they were looking for. Johann then told them that he was able to confirm the Pilgrim's "powers" and told them that "the Pilgrim's map" could help them in their search. Johann's "The Pilgrim's Map" then suggested that the key to finding out Rathimael's human identity could be in upstate New York.

Meanwhile, the team also asked Muriel about the demons. Muriel then suggested that they ask the kraken herself as she was the oldest and wisest of all aquatic beings. Muriel then directed them to find a protective amulet in her bag that she left on the campus. Felix then confirmed the protective ability of the amulet, which (per him) was made from an ancient singing stone. With the amulet, Gwen and the player went to see the kraken, who confirmed that demons were arising again and that they had stolen her sextant from her. She also revealed that she was making a pilgrimage to Niagara Falls, the most haunted place on the earth where a supernatural ball was taking place. The kraken then suggested them to go to the falls if they wanted to seek knowledge of the demons, and also warned them against the dangers there.

After all the events, with Johann and the kraken's help, the team decided to head to Niagara Falls to find out more about the demons, as well as Rathimael's human identity.

Theresa Rosenthal
Add a photo to this gallery

Kraken
Add a photo to this gallery 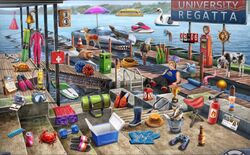 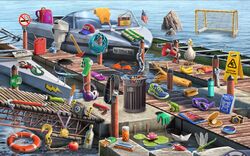 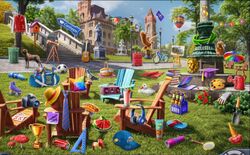 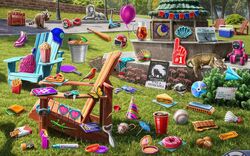 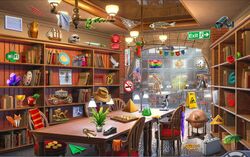 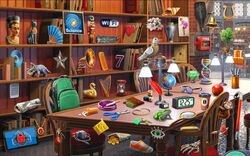 Library Table
Add a photo to this gallery

Retrieved from "https://criminalcasegame.fandom.com/wiki/No_Leg_to_Stand_On?oldid=526065"
Community content is available under CC-BY-SA unless otherwise noted.