Ninah Zafy was a suspect in the murder investigations of pilot Jakobo Nkosi in Crash and Burn (Case #37 of World Edition) and rally driver Nomena Leroy in Going the Distance (Case #41 of World Edition).

Ninah is a 21-year-old mechanic. She has black hair covered by a dirty cranberry red bandana. She wears a dirty white shirt underneath a pair of blue overalls which contains a wrench and a screwdriver in the front pocket.

In her first appearance, Ninah suffered from hay fever.

In her second appearance, Ninah's cranberry red bandana changes shades to be printed in a yellow African pattern. Her screwdriver is also closer to the wrench to make way for a De Brills Racing logo on her overalls. It is discovered that Ninah is knowledgeable about snakes, drinks champagne, and eats maafe.

Ninah was first interrogated after the player and Carmen identified her on a picture of her with the victim. She said she last saw the victim a few hours ago, hearing about the plane crash. When informed of his murder, she was shocked; saying she saw the plane crash and coming to see if anyone needed help, but the victim said there was nothing she could do. Ninah had known the victim because she did his engine services whenever he was nearby, when flying charter routes all over Africa.

Ninah was spoken to again about the victim's logbook, which accused her of poor safety checks. When she saw it, she was furious that the victim blamed her for his maintenance. Carmen asked if her carelessness was in any way the cause of the plane crash, to which Ninah replied saying that is ridiculous as she claims to be the best mechanic in the area. She insisted that if anything was wrong with the victim's plane, it was due to his neglect or carelessness, not hers.

Ninah was found to be innocent after the team incarcerated Aristide Akintola for Jakobo's murder. She was spoken to again about one of the plane's engine components which had a bullet hole. The team asked whether or not it would cause the plane to crash. She said the part in question were the hydraulic pipes, which were responsible for regulating the fluid that controlled the movement of the flaps on the plane's wings and tail. Any damage caused by the bullet would cause the hydraulic pump to rupture, which meant the victim would have lost control of the flight path, meaning someone deliberately shot the plane. This confirmed the team's suspicions regarding Aristide, meaning he tried to kill all of them.

Ninah became a suspect after the Carmen and the player found her on a picture of her and the victim when they were younger. She was saddened about Nomena's death, saying it was thanks to her that she got the job for the De Brills racing team; the two of them were like sisters, and Nomena's parents took her in after Ninah's family passed away. When they were young, they did everything together but they had did not have much of a chance to speak to each other since the rally began. When informed about the possibility Nomena was smuggling diamonds for SOMBRA, Ninah said she did not know anything about that.

Ninah was spoken to again about a bribe she refused from the victim, which had traces of coolant from the De Brills racing team on it. She explained the money was because the victim wanted her help smuggling diamonds during the race. This confirmed the team's suspicions that Nomena was complicit in the diamond smuggling, but Ninah had no idea where the other diamonds were and wanted no part in it, so she was given the money so she would stay quiet. She was angry that she was simply paid off like a servant by someone who she considered her sister.

Ninah was found innocent again after the team incarcerated Lavinia De Brills for Nomena's murder. But she was spoken to again by the player and Jack in hopes of finding the diamonds. When they found her, she was taking apart the De Brills Racing car since she heard about Lavinia murdering Nomena for the diamonds. Unfortunately, she still had no idea where the diamonds were, and said that she would have gotten rid of them herself if she did find them. She suggested they look around the pit stop, since that area was the only place Nomena could have hidden them. 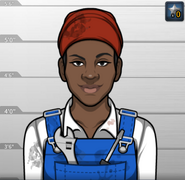 Ninah, as she appeared in Crash and Burn (Case #37 of World Edition). 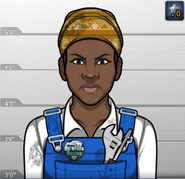 Ninah, as she appeared in Going the Distance (Case #41 of World Edition). 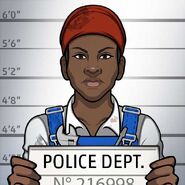 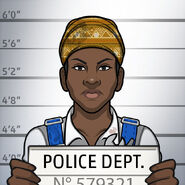 Retrieved from "https://criminalcasegame.fandom.com/wiki/Ninah_Zafy?oldid=481738"
Community content is available under CC-BY-SA unless otherwise noted.