Nina Hunt was a suspect in the murder investigation of shop owner Lucy Campbell in Fashion Victim (Case #14 of Grimsborough).

Nina is a 48-year-old bar manager with light gray hair and green eyes. She is seen wearing a black top underneath a brown jacket. She also sports circular golden earrings on her ears and a silver pearl necklace. It is known that Nina drinks Diet Cola and is right-handed.

She became a suspect when the player and Jones were searching her bar for clues. When asked if she knew the victim, Nina said that she had seen Lucy leaving with a strange man. He had written his number down on the waitress' notepad which they deciphered, which led them to Joey Manzano.

Nina was found to be innocent after the team incarcerated Odell Toole for Lucy's murder. However, Nina was then accused of selling absinthe to customers at The Golden Thimble. She denied the charges so the team took a look through her bar. They found a spoon which they found traces of an unknown substance. After Grace analysed it, she concluded that it was absinthe. The team found her and fined her. 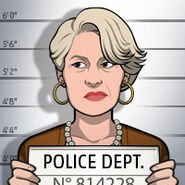 Retrieved from "https://criminalcasegame.fandom.com/wiki/Nina_Hunt?oldid=442707"
Community content is available under CC-BY-SA unless otherwise noted.