Nikolay Woloch was a suspect in the murder investigation of company director Gordon Michelli in Death by Crucifixion (Case #7 of Grimsborough).

Nikolay is a 41-year-old man with long untidy black hair. He has a 5 o'clock shadow and wears an open shirt which reveals a black t-shirt with lines through. He also sports a silver cross necklace. It is known that Nikolay is a Christian and drinks whiskey.

Nikolay was brought in when Ramirez caught him vandalizing the crime scene. When spoken to, he incriminated the mad woman named Linda Lovara. He said that he had to get away because his wife was going into labour. He was retained until the end of the case, but stayed to look for the ticket which had the hospital details that Ramirez had misplaced. 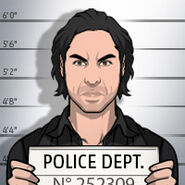 Retrieved from "https://criminalcasegame.fandom.com/wiki/Nikolay_Woloch?oldid=413910"
Community content is available under CC-BY-SA unless otherwise noted.