Nikolai is a 40-year-old scientist working for COSMORUS. He has neat brown hair, glasses, and a lab coat with the badge of COSMORUS.

In his first appearance, he wears a brown shirt under his lab coat. It is known that Nikolai drinks vodka, eats beef stroganoff and reads Tolstoy.

In his third appearance, he reverts to his first appearance. He does not hold the documents anymore and sports a bandage on his forehead. It is revealed that he knows physics.

Nikolai became a suspect after a file for a funding request he sent to the victim was found then analyzed by Elliot. He said that he had to go through Darya to get funding for his projects though he would have preferred it going to Natasha Romanova directly. He found the victim to be nothing but a power-hungry pen pusher. When informed of Darya's murder, he pointed out it would be harder to obtain the necessary funding for his project.

Nikolai was interrogated again about a check for him that was crossed out and replaced with the victim's name. It confirmed his suspicions that the victim was stealing his funding money. The only reason he did not tell the player and Jack was because he did not have any proof, only suspicions. Though he said he should not be surprised as he thought corrupt people like Darya always come off best.

Nikolai was found innocent after Liam Hall was arrested for Darya's murder, but he had to be spoken to again about the information Darya had access to since Natasha Romanova would not reveal anything. To ensure they obtained the necessary info, the player was accompanied by the newly-recruited Jonah. Unfortunately, Nikolai said that he sadly could not help because scientists did not have access to COSMORUS's classified data.

Nikolai became a suspect again after Jack and the player identified him on a picture of him with the victim. He was shocked at hearing of Nick's death, saying the two of them partied together, and Nick kept buying him shots. He met the victim while at work, and the two of them hit it off, despite Nikolai normally being seen as boring.

Nikolai was found to be innocent again after the team arrested Asal Hawaa for Nick's murder.

Nikolai became a suspect again after his signed photo of Yuri Gagarin was found at the COSMORUS training facility. He was shocked to see the player and Jack at the launch site with space suits. When informed of Vitaly's murder, Nikolai saw it as a tragedy. He said the victim had a plan to use satellites in order to improve the country's security, and though some people disagreed, Nikolai felt the victim kept Russia's best interests at heart.

Nikolai was interrogated again regarding his attempt to sabotage the launching of the satellite. He confessed to causing the explosion, and did it to stop the launch permanently so COSMORUS could allocate more money to his research. He felt that COSMORUS put too much money into satellite projects and not enough into human space exploration. Nikolai felt his talents were going to waste, and the victim got in the way of his first attempt to sabotage the mission; but with the site on lockdown and Vitaly dead, he felt he could go on with it without interruption.

Nikolai was found to be innocent after the team incarcerated Yelena Tereshkova for Vitaly's murder. However, he was spoken of again regarding him looking into SOMBRA. Jonah and the player went to the training pool and successfully found Nikolai’s tablet, which was sent to Elliot for analysis. Elliot confirmed that the tablet was Nikolai’s and he wanted to override the satellite as well. However, there was a piece of the code missing to completely override it. Jonah was then prompted to talk to Nikolai and convince him to give the player the code. Nikolai was hesitant, saying that he would not give the code because he wanted SOMBRA to reach out to him. When asked how he knew the name, Nikolai mentioned that it had kept appearing in Natasha’s files. As COSMORUS did not care about space travel anymore, Nikolai would hack into their satellite to get their attention. Jonah then forced Nikolai to go with them to help them stop the satellite. 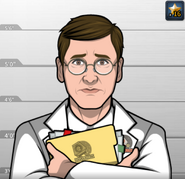 Nikolai, as he appeared in Moscow Mole (Case #13 of World Edition). 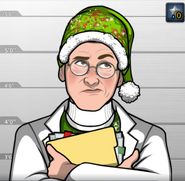 Nikolai, as he appeared in O Deadly Night (Case #15 of World Edition). 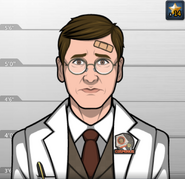 Nikolai, as he appeared in Countdown to Murder (Case #18 of World Edition). 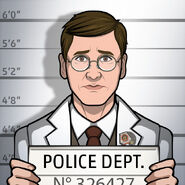 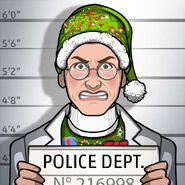 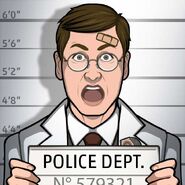 Retrieved from "https://criminalcasegame.fandom.com/wiki/Nikolai_Sharapov?oldid=409282"
Community content is available under CC-BY-SA unless otherwise noted.