Nicolette Butler was the killer of stripper Voodoo Vince in Hot Mess (Case #11 of The Conspiracy).

Nicolette is a 55-year-old client of The Maneater strip club. She has dark blonde hair and wears a pink leopard print jacket with a white fur collar and a light pink zebra-stripe shirt. She also wears gold earrings and a matching necklace with her name on it, along with a long light blue necklace. It is known that Nicolette has had plastic surgery, drinks Pink Thongs and dances the tango.

Nicolette became a suspect after Jones and the player found the bracelet she had given to the victim. She told them that she often visited the strip club to watch the boys perform and revealed that she gave all the performers gifts as tokens of her affection.

Nicolette was spoken to again about the victim's notes on her, which revealed that he would never work for her again. She revealed that Vince thought she was too intense for him, but she had plenty of other boys at the club who would entertain her, so she didn't care.

In the end, it was proven that Nicolette was Vince's killer. Upon admitting to the crime, Nicolette stated that Vince considered her a "dangerous stalker", and hence advised the other entertainers not to serve her. Angry at Vince for taking away her "sea of men", Nicolette poisoned his cocktail with botulinum toxin. Judge Powell sentenced her to 25 years in jail for the murder. 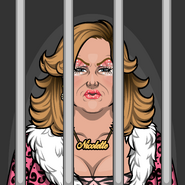 Nicolette, sentenced to 25 years in prison for the murder of Voodoo Vince. 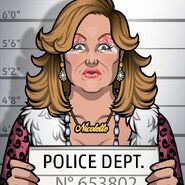 Retrieved from "https://criminalcasegame.fandom.com/wiki/Nicolette_Butler?oldid=461152"
Community content is available under CC-BY-SA unless otherwise noted.