Nick Kringle was the victim in O Deadly Night (Case #15 of World Edition).

Nick was a CIA operative who was going undercover as a maintenance worker for COSMORUS. He also played Santa for the people of the town around Christmas time. Nick had graying black hair and facial hair and was known to be a smoker. He also had dark brown eyes. He donned his Santa outfit.

Nick was found frozen in a block of ice in the middle of the lake. He was sent to Angela, and though she managed to determine the victim was shot, she did not know what he was shot with. She did manage to find cut marks on his fingertips consistent with the blade of an ice skate. She thought this was because the killer wore ice skates to drag the victim into the hole in the ice, meaning the killer ice skated.

After examining the lake again Jack and the player found a bullet sabot covered in some sort of red dust. It was sent off to be examined by Jonah, and not only did he find the bullet match, he found what kind it was. It was revealed to be an ice bullet due to traces of dry ice. The killer also left some red glitter on the sabot, which meant the killer wore red glitter.

Nick was deployed to Siberia three years prior along with his handler, Forrest Hunt, who went by the name Forrest Sugarcrystal while playing the elf. Forrest thought that Nick was too much of a drunkard to do his duties properly. Nick had gotten scientist Nikolai Sharapov drunk in order to take a look into confidential COSMORUS documents. Meanwhile, Mossad agent Asal Hawaa was deployed to spy on Nick to learn what he was doing in Siberia. Nick was in a relationship with cosmonaut Yelena Tereshkova, who had caught him cheating on her with bartender Dominika Snegurochka, who was getting displeased at Nick starting to get possessive and scaring away her male customers.

The killer turned out to be Asal.

After denying involvement, Asal admitted to the crime. She improvised an ice bullet and killed Nick with it following Mossad's orders, as they believed that Nick was up to something dangerous. By virtue of the relationships between Mossad and the court, and understanding that Asal had to kill Nick to keep the international security, Judge Adaku granted her immunity for the crime.

After the trial, Asal told the team that Nick was suspected of being a double agent. The team then found evidence of Nick funding SOMBRA through an offshore account and found SOMBRA's "Operation: Darkness Descends" plans in his phone as well, confirming that he was a double agent, much to Forrest's surprise. 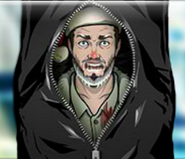 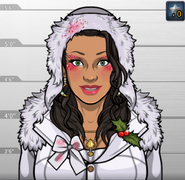 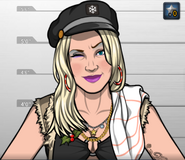 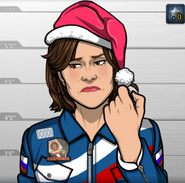 Yelena Tereshkova, Nick's girlfriend.
Add a photo to this gallery

Retrieved from "https://criminalcasegame.fandom.com/wiki/Nick_Kringle?oldid=516991"
Community content is available under CC-BY-SA unless otherwise noted.