Nicholas is a bespectacled, 22-year-old architect and the twin brother of Evie. He has brown hair and brown eyes. He wears a brown vest over a white collared, long-sleeved shirt, as well as a blue bowtie. Additionally, he has a pencil behind his ear and a ruler and a compass in the pocket of his vest. It is known that Nicholas is a graduate of the Oxford School of Architecture.

A blueprint of the Crystal Palace was sent to Evie to analyze. Given that architecture was not her strong point, she passed it on to her architect twin brother, Nicholas, who was a graduate of the Oxford School of Architecture. According to him, the numerous modifications made by Norah Barnlow compromised the safety of the palace's structure. He then said he was willing to salvage the project himself.

Justin Lawson, Nicholas, and the player went to Gus Smiffel to appease him and the protesters so that they would stop. Upon discussing his plans for the palace, Gus was convinced that Nicholas could be a good head architect. They then agreed to work on the project as soon and as fast as possible before the opening of the Exhibition.

Under his supervision, the palace was finished and the city was able to use it as of the day when the inventions would be presented.

Isaac and the player had to talk to Nicholas after Charles unveiled that on a dungeon model they found of the prison that the rest of the team was being kept in. When Charles said that the only way they could get in the room where the team was being kept was by using a key, and Isaac subsequently asking how they could find a key, Charles said that he had called Nicholas to talk to Isaac and the player.

When Isaac and the player talked to Nicholas, he said that since his baby sister was in the prison, he would do anything to help. When Isaac said that the team was being kept in the dungeon under the town square, he said that the walls there were impenetrable. He then proceeded to say that Radcliff Highmore, the person that constructed the dungeon, was famous for making special locks for the dungeon. When he was finished constructing the dungeon, he was forced to hand over a skeleton key, but out of paranoia, he made a copy of the key and kept it for himself. This prompted Isaac and the player to search the cellar again in search of the key. 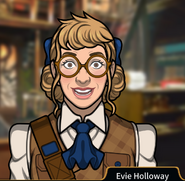 Retrieved from "https://criminalcasegame.fandom.com/wiki/Nicholas_Holloway?oldid=529156"
Community content is available under CC-BY-SA unless otherwise noted.