Nelson Campbell was a suspect in the murder investigation of homeless man Steve Wood in A Deadly Game (Case #20 of Grimsborough).

Nelson is a 60-year-old anthropologist who has blond hair only at the sides and back of his head. He has green eyes and dons a dark brown suit with a black and gray vest, and a white shirt with an off-white tie underneath his suit. It is known that Nelson eats caviar (fish-eggs).

Whilst investigating the creepy basement where Steve Wood was tortured to death, Jones and the player found a torn cover. Restoring it, the team learned that the cover was of a book named The Human Burger Theory, written by anthropologist Nelson Campbell. As such, the team had to interrogate Nelson.

The team, later on, found a torn card in Cooperville, a homeless camp where Steve lived until his demise. The player did not hesitate to restore the card, thus identifying it as a business card belonging to Nelson--prompting the team to interrogate Nelson for the second time. Nelson stated that he had given the card to a trader named Tyler McAlister, and concluded that Tyler was very interested in his book (The Human Burger Theory) and wanted some more details. 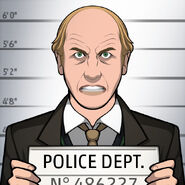 Retrieved from "https://criminalcasegame.fandom.com/wiki/Nelson_Campbell?oldid=408669"
Community content is available under CC-BY-SA unless otherwise noted.