Nellie Appleton was a suspect in the murder investigation of stage actor Jacob Dawks in To Die or Not to Die (Case #22 of Grimsborough).

Nellie is a 24 year-old actress with long black hair underneath a thin crown with a red gem on it. She wears a navy blue cloak with a hood that has white fur on it. It is known that Nellie wears make-up, drinks wine and uses anti-aging cream.

Nellie was an actress of the play, Hamlet, that was about to be shown in the Grimsborough Theater later the night after the main actor, Jacob Dawks' death took place. When Jones and the player were searching Jacob's room, they found a torn playbill. They pierced it back together and discovered that it was the playbill of the same play called Hamlet. There was also something written on the back, but it was not quite clear. So the team scratched it and found out that it was a note written by Nellie to Jacob. It read, "Nellie Appleton, 7 am, Grimsborough Theater". The team got very suspicious over Nellie since 7 am was the exact same time when Jacob was murdered. When asked about her relationship with the victim, Nellie said that the two were co-workers. Then, when Jones asked Nellie about her meeting with Jacob that morning before the victim's death, she replied that she did not go to meet Jacob since he was "improper." She said that Jacob was always trying to get her alone and that he used to tell her that he could help her if she could give Jacob "a little something." Nellie also admitted that Jacob wanted to meet her in the theater, but also said that she never went to him.

Later, it was revealed that Nellie was in a relationship with Phineas Fine (stage director of the Grimsborough Theater), when the team found a photo (in Jacob's room) of Phineas kissing Nellie.

Nellie was found to be innocent after the team arrested Phineas for Jacob's murder.

A poster advertising the play Nellie was performing: Hamlet. 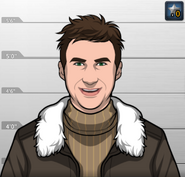 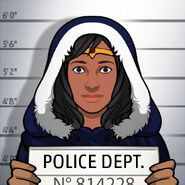 Retrieved from "https://criminalcasegame.fandom.com/wiki/Nellie_Appleton?oldid=454812"
Community content is available under CC-BY-SA unless otherwise noted.