Nathaniel Earl was a suspect in the murder investigation of photographer Jordan Coprolite in Muddying the Waters (Case #25 of The Conspiracy).

Nathaniel is the 30-year-old drug dealer and friend of the victim. He has blond quiff hair, blue eyes and faint traces of facial hair. He is seen wearing a pale yellow shirt with "DULCE CABANNA" written in a multicolored motif under a black jacket with white collar linings. He is also seen with a pair of black sunglasses, hanging from his shirt, as well two mosquito bites: one on his left cheek and one on his neck. It is known that Nathaniel knows knots, plays polo, eats cinnamon rolls and is a nail biter.

Nathaniel became a suspect after Aubrey Coprolite, the victim's wife, mentioned his name. At first he thought that he was in trouble, however, Nathaniel was then surprised as Jones and the player then told him that Jordan had been murdered. When being asked about the victim, Nathaniel told the team that he and Jordan were friends and they usually hung out and told each other to have a nice day. After the conversation, Jones reminded Nathaniel to call them if he remembered anything.

Nathaniel was spoken to again after the team (per Gabriel) found out that he was the victim's drug-dealer. When being asked about this, Nathaniel justified this as his own way of making friends with Jordan and did not take the conversation seriously. Jones and the player then arrested Nathaniel for being the victim's drug dealer, who wondered who would bail him out then that Jordan was dead.

Nathaniel was found to be innocent after the team incarcerated Anuj Ghosh for Jordan's murder. However, he was still in custody for his drug-dealing. 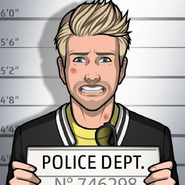 Retrieved from "https://criminalcasegame.fandom.com/wiki/Nathaniel_Earl?oldid=430207"
Community content is available under CC-BY-SA unless otherwise noted.