Naomi Suzuki (Jpn: 鈴木直美), also known as The Justice Rider, was a suspect in the murder investigation of a street racer named Carlos Antonio in Death on Wheels (Case #2 of Pacific Bay).

Naomi is a 29-year-old Japanese-American vigilante. She has shoulder-length black hair with red ends. She wears a common motorcyclist suit which has a color scheme of red, yellow, black, and white and the logo of "Sawa Motorcycles" on the right side. She also wears a diamond earring on her left ear. It is known that Naomi knows car mechanics. 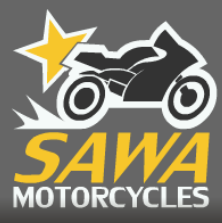 Frank and the player confiscated Becky Walden's phone as evidence in Carlos's murder investigation with a picture of a Sawa motorcycle catching their attention. With Hannah's analysis of the motorcycle, she confirmed the motorcycle belonging to a vigilante named Naomi Suzuki—aiming to end all street racing activity in Ocean Shore once and for all.

Upon Naomi's arrival in the interrogation room, Frank told Naomi that she was in the crime scene when the murder occurred but all Naomi recalled was the car with a guy strapped to the hood, torturing the victim to death, even wanting to shake hands with the person who went for the kill. Naomi blamed Carlos for putting a lot of lives in jeopardy with street racing activity and hoped Carlos's murder would be an example of her wishes—something Frank realized Naomi needed to remain on the suspect list.

Hannah told the team she dug further into Naomi's past in a simple message: Naomi's parents were killed years ago in a car accident, and Carlos was liable for the death of Naomi's parents, but was never indicted for the accident—prompting the team to talk to Naomi once again.

Naomi was infuriated when the team claimed she killed Carlos for revenge but knew that Carlos killed her parents and got away with it. Naomi dropped a bomb by stating that Derek Stone owned the helm of street races. Although the police and Naomi hated Derek equally, Naomi was told to follow laws as well, a sign indicating Naomi was close to stepping into the wrong side of the law.

Naomi was proven innocent, but in the aftermath of Shawn Bailey's indictment, got into a fight with Derek to force him to pay overdue speeding tickets. The team looked everywhere for Naomi, but once Naomi stepped in the station, apologized for all the ruckus she created. 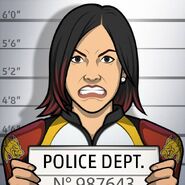 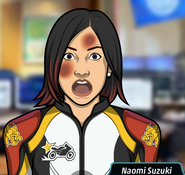 Naomi, as she appeared in the Additional Investigation, sporting dark bruises caused by her nasty fist-fight with Derek.
Add a photo to this gallery

Retrieved from "https://criminalcasegame.fandom.com/wiki/Naomi_Suzuki?oldid=504408"
Community content is available under CC-BY-SA unless otherwise noted.