Myriam Miller (Heb: מרים מילר) was a suspect in the murder investigation of ex-convict David Breitman in Payback (Case #12 of Pacific Bay).

Myriam is a 40-year-old owner of a delicatessen in Inner City. She has shoulder-length brown hair with gray streaks and small turquoise earrings. She has a lot of wrinkles around her face and wears pink glasses. She sports a brown-black blouse and a pink plaided apron with the word "DELi" on it. She also wears a gold chain necklace and has a lime green towel draped over her left shoulder. It is known that Myriam drinks tea.

Myriam is the owner of a Jewish Delicatessen in Parks Avenue.

Myriam was called into the murder investigation the moment Amy found David Breitman dead after he sustained significant blood loss from a deep throat gut. All Myriam recalled was David wanting to buy food, moments before he died. Myriam went back to get what she needed which resulted in the killer gutting David to death discreetly. All Myriam remembered was David talking about his intention to meet someone at the train station. Amy and the player continued their investigation at the Inner City Railway.

Myriam was approached by the team for a second time after Amy and the player found an old article (pieced back together) covering David's arrest during the team's second visit to the Inner City Railway. The article covering David's arrest revealed a messy affair when Myriam's father Isaac was slain when David was apprehended, Amy became desperate for answers. Myriam told the team that her father was known as "The Fox" since he worked with David in cracking safe combinations but in spite of Amy's feelings of Isaac Miller's illicit abilities, Myriam had feelings of her father's robberies being justified. Since Isaac spent too much time in the robbery, the police arrived to subdue Isaac and David, killing Isaac and apprehending David for the robbery, in which Myriam blamed David's poor tactics for Isaac's death.

Myriam was found innocent (in spite of her father's background) when the killer was incarcerated and impounded for grand homicide. 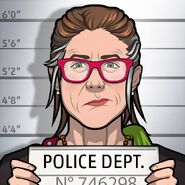 Retrieved from "https://criminalcasegame.fandom.com/wiki/Myriam_Miller?oldid=413789"
Community content is available under CC-BY-SA unless otherwise noted.