Muthui Ndiritu was a suspect in the murder investigation of safari guide Kariuki Maina in The Circle of Death (Case #38 of World Edition).

Muthui is a 29-year-old elephant poacher. He has crew cut black hair, goatee, and a scar on his right cheek. He wears a plaid beige shirt, a sash with a dagger, and an earring on his left ear. It is known that Muthui is knowledgeable about plants, eats nyama choma, and has navigation skills.

Muthui became a suspect after the player and Jack found his hair on a bottle of acid at the poacher's camp the victim worked at. He tried to deny it and said the victim did it on his own, but Jack pointed out the evidence they had against him. Muthui gave up and confessed to his involvement in elephant poaching, but said it was the victim's idea to make money selling elephant tusks. When informed on Kariuki's death, Muthui was shocked but said he had no involvement in it. For his part in poaching, Jack and the player decided to take Muthui into custody until they discovered the extent of his crimes.

Muthui was interrogated again after his blood was found on a rock at the crime scene. He said the blood was on there because the victim threw the rock at him when he asked for an equal share of the ivory profit. The victim said he wanted more because he found the buyers and Walt with any potential obstacles, but Muthui said he was the one who hunted them. As their operation continued, the victim got richer but Muthui stayed poor; but felt the victim's death was his just desserts.

Despite his cooperation in the victim's activities, Muthui was found to be innocent after the team incarcerated Nyota Adhiambo for Kariuki's murder. 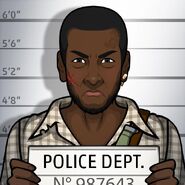 Retrieved from "https://criminalcasegame.fandom.com/wiki/Muthui_Ndiritu?oldid=408684"
Community content is available under CC-BY-SA unless otherwise noted.