Muriel Cove was the killer of university student Eric Prynce in No Leg to Stand On (Case #21 of Supernatural Investigations).

Muriel is a 19-year old mermaid and a marine biology student at Highsmith University. She has black eyes and long brown hair braided with seashells. She wears a light blue see-through tank top over a blue bikini top adorned with a yellow star in the middle. She also wears a silver anchor necklace. It is known that Muriel is left-handed, eats Philly cheese steak sandwich and reads Arthur Darkwood books.

Muriel became a suspect after Gwen and the player found her student ID at the crime scene. She identified the victim as the second seat on the crew team and mentioned that she sometimes saw his team train during her field work. When asked about the state of the victim's legs, she told the team that the biggest things living in the river were harmless carp. She then pointed the team in the direction of the university garden.

In the end, it was proven that Muriel was Eric's killer. Admitting to the murder, Muriel confessed that she was a mermaid, telling them that she was in love with Eric's girlfriend, sorority president Vanessa Sadler, after Muriel saw her while swimming by the dock. Muriel then sought the kraken's help in granting her wish to walk on land in order to confess her love to Vanessa, only to be rejected by her, nevertheless. Muriel then begged Eric to break up with Vanessa. However, Eric refused Muriel's beg, making her angry and kill Eric with a dagger. Muriel then fed Eric's legs to the kraken as a payment for helping her turn into a human. The team then turned Muriel over to the authorities after the latter confirmed that she would face the consequences as a human.

Later, Gwen and the player questioned Muriel about demons, revealing their true identities as Supernatural Hunters. Muriel told the team that she had already had her suspicions about them and told them that creatures of the sea were aware of demons. She informed them that they needed to talk to the kraken and warned them that they needed a protective amulet when they talked to her. Gwen and the player then returned to the campus to find Muriel's amulet. 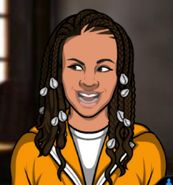 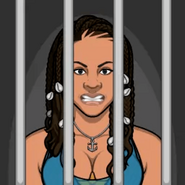 Muriel, turned over to the authorities for the murder of Eric Prynce.
Add a photo to this gallery

Retrieved from "https://criminalcasegame.fandom.com/wiki/Muriel_Cove?oldid=529070"
Community content is available under CC-BY-SA unless otherwise noted.