Zara Tien (All Chapters)
Theodore Moon (A Stroke of Genius 3)

Murder Is No Joke is a case featured in Criminal Case as the thirteenth case of Travel in Time (Season 6) and the three-hundred fourth case overall. It takes place in Renaissance.

Zara and the player took a walk in the Chambord castle gardens after dropping off Leonardo da Vinci to finish his mural for King Francis I. There however, they found court jester Triboulet stabbed in the throat, heart, and stomach and left for dead in the fountain.

Mid-investigation, the town crier told the team that he had seen Triboulet alive near the musketeer barracks, who turned out to be his identical twin, tax collector Charles Ferrial. Later, royal guard Alexandre Devereaux told the team that scullery maid Gilia La Bonne was the murderer after they had arrested her for theft from the king. The team then found enough evidence to arrest Charles for the murder.

Post-arrest, Orlando asked Zara and the player to find Penelope, who had snuck out of the time machine mid-investigation. He advised the team to check the barracks, where they found Penelope's ribbon which (per Orlando) had silver-cleaning reagent on it, prompting the team to ask Gilia for more leads. Answering about Penelope's whereabouts, Gilia told the team that she was with Devereaux gathering provisions in the banquet hall. In the hall, the team found a parchment which was a message from Penelope to T.I.M.E., saying that she had left them to be with Devereaux. The team instantly went to ask King Francis where Devereaux had gone, who then relayed that he had dispatched him to the Ottoman Empire.

Meanwhile, Theo and the player concocted a faster-drying paint so that Leonardo could finish his mural faster and assist the team sooner. After all the events, Leonardo said that he could leave the rest of the mural to his students. He then offered to join the team as they depart to the Ottoman Empire to get Penelope back.

Charles Ferrial
Add a photo to this gallery 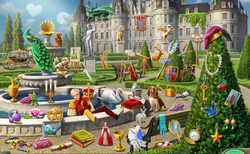 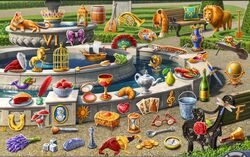 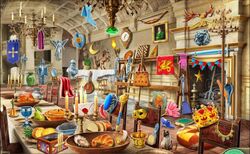 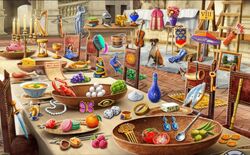 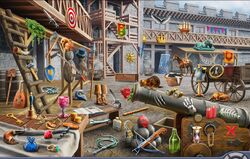 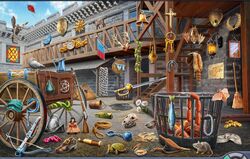 Barracks Staircase
Add a photo to this gallery

Start a Discussion Discussions about Murder Is No Joke