Mr. and Mrs. Caffrey appeared as a pair of quasi-suspects in A Murder Carol (Case #4 of Mysteries of the Past).

Pippa first came to the player and Evie in order to find her parents. They agreed to help, and after finding a photo of them Evie was able to track them down to their current location. Pippa was happy to see her parents and vice versa, and were glad they were able to celebrate Christmas together. Later, the Caffreys were invited to a Christmas party that the team was hosting. 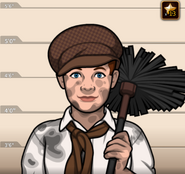 Pippa Caffrey, Mr and Mrs Caffrey's daughter.
Add a photo to this gallery

Retrieved from "https://criminalcasegame.fandom.com/wiki/Mr_and_Mrs_Caffrey?oldid=535478"
Community content is available under CC-BY-SA unless otherwise noted.