Mortimer is a 62-year-old geologist with grey hair combed to the side, a grey stubble and green eyes behind a pair of square glasses. He is seen wearing a white collared shirt, a grey tie and a navy blue sweater under a tweed jacket.

After arresting Mason Bloom's killer, the team learned that Mortimer was a scientist who was about to go on a flight from London to Grimsborough to work under the dome under DreamLife's employment. Cathy also dug into his history and discovered that he attended Oxford University with Rupert, prompting Gloria and the player to come to Rupert's lab and ask him about Mortimer.

After arresting Joshua Gibson's killer, the team (per Cathy) found out that Mortimer had arrived in Grimsborough and had booking himself in for two nights at the Glitz Hotel. The team then informed Chief Parker about him. When being informed, Chief Parker suggested that the team formulate a plan to intercept Mortimer and make him cooperate.

After arresting Celine Dernier's killer, Rupert, Gloria and the player came to the Glitz Hotel's reading room to intercept Mortimer and make him cooperate with the police. There, Mortimer told Rupert (in a secret language which Mortimer and Rupert made up at the University of Oxford) that DreamLife had given him a bugged device. The team then searched the reading room in silence after Mortimer told Rupert that the device was left there. Rupert and the player found Mortimer's bag and got the device to Cathy to analyze. Cathy then told the team that she was surprised as the device was so high-tech, but she then managed to disable the bugging system and had Rupert recognized as the device's owner. After knowing that Mortimer was against DreamLife as he told the team about the bugged device, Rupert and the player talked to him again to explain their plan. Mortimer said that Rozetta Pierre, DreamLife's founder, had contacted him to study a "rare geological specimen". He quickly turned suspicious, however, after having to sign various non-disclosure agreements, receiving the bugged device, and hearing from Rozetta that the radiation in the dome was harmless, contrary to what the company had said to the public to keep them off the dome. In the end of the conversation, Mortimer agreed to switching with Rupert while he stayed in the police's witness protection program.

After arresting Mayor Martha Price's killer, Rupert and the player were about to go to the Glitz Hotel so that he could switch places with the real Mortimer to go undercover in DreamLife. However, Gloria then told the team that Mortimer had gone to the park, prompting she and the player to go there to find him. Later, Gloria and the player found Mortimer sightseeing in the park and promptly took him to Rupert so they could perform the switch.

After arresting Barb Bellamy's killer, Gloria and the player found a box of crystal fragments from the meteorite in the meteorite lab. After knowing that Mortimer had volunteered to help the team analyze the fragments, the team got a core fragment to him, who was able to discover that the meteorite was made of the element Berzelium, an extremely rare element which had previously only been theorized to exist. However, Mortimer could not explain more to the team about the effect of Berzelium as it did not exist on Earth.

Later, per lab technician Emilio Fuller’s words, the team found a test rabbit, which was injected with Berzelium, in the meteorite lab. After the team got the rabbit to Mortimer, he was able to discover that the Berzelium had suppressed the rabbit's immune system. Knowing that the meteorite had also been able to heal a plant (per Amir's previous analysis of a meteorite fragment), Mortimer concluded that Berzelium had two opposing effects: to enhance and to suppress an organism's immune responses. 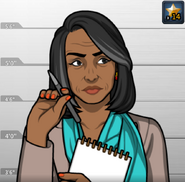 Catherine Kelly, Mortimer's ex-girlfriend.
Add a photo to this gallery

Retrieved from "https://criminalcasegame.fandom.com/wiki/Mortimer_Pickering?oldid=418053"
Community content is available under CC-BY-SA unless otherwise noted.