Mortimer Mutlog is a 63-year-old bald taxidermist who wears a white shirt with a brown apron. It is known that Mortimer loves theater and has sewing skills.

When Jones and the player had been searching Mortimer's taxidermy showroom, they found the victim, Wilfred Turnscrew's fountain pen. When asked what the victim's fountain pen was doing in his showroom, Mortimer said that Wilfred had come to his shop for complaining about his cat which Mortimer had taxidermied a few years ago. The cat had started to rot, and for this reason, Wilfred went to Mortimer's shop and yelled at him. Mortimer claimed that the fountain pen might have fallen out of the victim's pocket when the two were arguing with each other.

Afterwards, the team again went to Mortimer's shop to have a closer look. There, they found a libel suit inside a chest. They learned that Mortimer had tried to sue Wilfred and claimed that the writer had used him as the villain (Morg) in one of his books. When asked about his attempt to sue the victim, Mortimer said that the victim had humiliated him in his best selling book by making him the villain, Morg. He said that, in the book, Wilfred had turned him into a failed taxidermist who taxidermied people alive. For this reason, Mortimer had tried to sue Wilfred, but unfortunately for him, the libel suit got turned down. He also said that Wilfred used to come round his shop and mocked him, and that Mortimer wished that he, too, could go to the museum to mock the victim.

Mortimer became a prime suspect. The reason he was so suspicious was because he hated Wilfred, and moreover, the victim was skinned and taxidermied, which was Mortimer's speciality. However, he was eventually found innocent when Cornelia Trent was incriminated as the one who killed Wilfred. 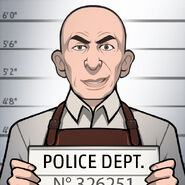 Mortimer's stuffed eagle.
Add a photo to this gallery

Retrieved from "https://criminalcasegame.fandom.com/wiki/Mortimer_Mutlog?oldid=531554"
Community content is available under CC-BY-SA unless otherwise noted.