Monty is a 43-year-old writer who has neck-length gray hair that wears a pair of brown-rimmed glasses. He wears a brown turtleneck underneath a black jacket and red scarf with his initials and a turtle-shaped turquoise brooch. It is known that Monty has an art degree.

Monty was a writer who was called in to speak about the death of Wilhelm Moss, whom he knew. He was called in after Jones and the player found his book (The Mad Pilgrim) in the murder scene. When asked about Wilhelm's portrait of The Mad Pilgrim, Monty said that the Pilgrim was a cruel man who ruled over Grimsborough during the 17th century. He had sent hundreds of people to the gallows for the most trivial reasons. Finally, the people of Grimsborough had had enough, and one night, the Pilgrim's maid poisoned his mead, and let the peasants in. They cut the Pilgrim's body into pieces and buried them to four corners of the town. After this, the people used to believe that the Pilgrim's soul remained trapped on the Earth, forever angry. Anyone who had tried to paint his portrait had died in most unusual circumstances. As for the book, Monty said that he was surprised that the victim had it since it was very hard to find. He said that the only people who still used to buy the book were students in Fine Arts, just like he was. 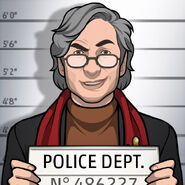 Retrieved from "https://criminalcasegame.fandom.com/wiki/Monty_Washington?oldid=408649"
Community content is available under CC-BY-SA unless otherwise noted.