Monkey Business is a case featured in Criminal Case as the sixteenth case of Mysteries of the Past (Season 4) and the one-hundred eighty-seventh case overall. It takes place in the Century Mile district of Concordia.

Isaac and the player rushed to the giant ape's cage to assess the situation. There, they found the poisoned body of Ernest Picklebrain, the professor who had created the giant ape.

Soon after the investigation started, there were reports of the ape climbing the Exhibition Tower. Rose was able to tranquilize it. Later, Dick found out that the poisonous jellyfish used in the murder was procured from the victim's own lab. Afterwards, Rose sang the ape to sleep before it could escape from its improvised cage. The team later found enough evidence to arrest Sir Somerset Osborne for the murder.

After denying involvement, Somerset admitted to the murder. He was angry with Ernest for experimenting on humans, including his sister, Aurora, who glowed in the dark thanks to Ernest's experiments. He then took Beata Seahorn's Chironex fleckeri, bashed Ernest on the head, and forced him to swallow the jellyfish, poisoning him in the process. Judge Takakura sentenced him to 15 years in prison for the murder.

Post-trial, Greta Gundwood told Isaac and the player that her invention (a camera which took pictures in color) had been sabotaged. The two found the camera in the exhibition tower street. Charlie confirmed that it was tampered with, making it the third invention to be sabotaged. Isaac and the player then warned Chief Inspector Eleanor Halsted that there was a saboteur in the Exhibition.

Meanwhile, Katherine Woolf and the player found Aurora in Lady Highmore's study and treated her of her glow with Dick's help. After all the events, Isaac and the player gave Willie Conklin the ape's records so that the Concordia Zoo would take her in. The Squad then resolved to be more vigilant the next day, when all the inventions would be presented.

Somerset Osborne
Add a photo to this gallery

Eleanor Halsted
Add a photo to this gallery 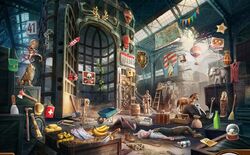 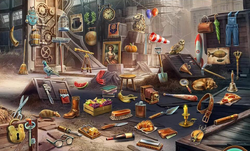 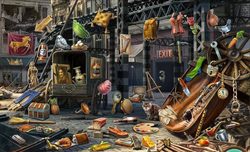 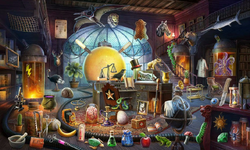 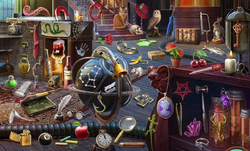 Scientist's Workplace
Add a photo to this gallery

Retrieved from "https://criminalcasegame.fandom.com/wiki/Monkey_Business?oldid=422789"
Community content is available under CC-BY-SA unless otherwise noted.