Mona Middlefinger was a suspect in the murder investigation of roller derby captain Susie Pickley in Dead Girl Rolling (Case #4 of Pacific Bay).

Mona is a 26-year-old roller derby captain with tanned skin. She sports a spiked collar and a black, green and white roller derby uniform with her team's name, Pacific Pixies, written on it. Mona also sports roller derby gloves in her team colors and wears charms around her neck. Mona has two sport marks underneath her brown eyes and has short white hair with turquoise streaks. It is known that Mona plays the guitar and practices yoga.

The first time Mona was approached by the police was moments after Mona shoved Susie out cold, having the audience deducing Mona's act were grounds for a penalty. Susie was found dead and Amy and the player shipped Susie's body for immediate autopsy. Mona admitted she had to shove Susie after she kept blocking excessively but Amy wanted to inform Mona that Susie was dead. Mona told the team she was a blocker for the Pacific Pixies and her job was to prevent Susie from overtaking her team. Mona told the team the only suspicious thing she saw were creeps around the roller link before match play.

Mona was confronted by the police a second time when the team found a showdown flyer pieced back together found at the performer plaza at Ocean Shore, and Amy was curious to know about the rivalry between Susie and Mona. Mona thought Susie was too light for roller derby because of her housewife premise, and felt that Mona had more experience than Susie, thought the Pacific Pixies had the experience over the Helter Skaters, but alas, none of her conversations made sense to the team.

Mona was found innocent when Barbara Pickley was indicted for Susie's premeditated murder. Russell wanted to know more about the roller derby world, but Mona admitted to the team that she was not just a tough competitor--she had a lighter side of her which involved playing plays for charity with Lenny Spitfire. In spite of the turbulent events of the case, Mona was able to continue on with her roller derby life. 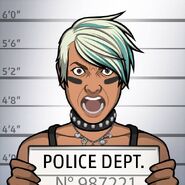 Mona (middle) on the case's promotional flyer.
Add a photo to this gallery

Retrieved from "https://criminalcasegame.fandom.com/wiki/Mona_Middlefinger?oldid=501370"
Community content is available under CC-BY-SA unless otherwise noted.