Molly Byrne was a suspect in the murder investigation of her husband, distiller Davy Byrne, in Blue Blazes (Case #21 of Mysteries of the Past).

Molly is a 38-year-old seamstress. She has light brown hair that is braided to the side and has freckles. She dons a light purple dress with dark purple designs, a white collar, and a black ribbon with a blue stain on it. She also wears a black coat with a pocket with a safety pin attached to it that contains scissors and thread. It is known that Molly goes to horse races.

Molly became a suspect due to. When informed of the murder, she asked to see the victim and hoped that they had the wrong person. In realizing that they didn't, she broke down and said that her worst nightmare had come true now that Davy was gone. Maddie and the player left her to grieve in peace, saying that they may require her assistance as the investigation continues.

Molly was spoken to again after a gun with her name carved on it was found in her shop. Davy had given her the gun as a gift to make sure that she could take care of herself. When they got married, the victim swore to never put her in harm's way but instead he had them caught up in with the gang's chaos, which she never wanted for them. The gun was the last straw because she felt that Davy wouldn't understand that she never asked for this life, and yet he doomed her to it.

Molly was found innocent when the team incarcerated Mauro Massetti for Davy's murder. 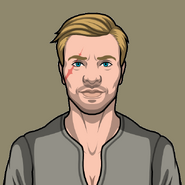 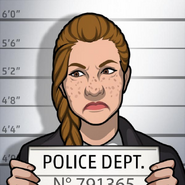 Retrieved from "https://criminalcasegame.fandom.com/wiki/Molly_Byrne?oldid=430435"
Community content is available under CC-BY-SA unless otherwise noted.