King Mohammad Ben Khalid Souleyman (Arab: محمد بن خالد سليمان) was a suspect in the murder investigation of his father, King Khalid Souleyman, in All the King's Horses (Case #49 of Grimsborough).

Mohammad is a 7-year-old crowned prince from the Souleyman royal family of Sultanistan who wears a white keffiyeh and a dark colored thobe and wears a pashmina around his neck. It is known that Mohammad is superstitious, wears riding boots and smokes water pipe.

Mohammad is a blood relative of the Sultanistan Royal Family, or the Crown Prince of Sultanistan to be exact.

Mohammad was first seen complaining the boredom of Mayor Howard Johnson's speech. After King Khalid Souleyman was slain at the Grimsborough Horse Riding League, Jones mentioned that Mohammad must be questioned with care since he was now the king. Mohammad told Jones and the player that they needed to address him as "Your Highness", however his behavior was far from being in par with all kings before Mohammad. Mohammad did not want visitors in his room, so the team had to hack the lock to access Mohammad's room for more clues, specifically a royal decree belonging to Hilda Tipton.

Mohammad's immaturity towards the team, not to mention a possible collapse in the Sultanistan oil market, made him declare an oil embargo to conserve oil, live on TV, and gave the Grimsborough Police Department 24 hours to apprehend the killer or all business relations between America and Sultanistan would be shut down on Mohammad's orders.

Mohammad was approached by the team again when they found a cheat sheet Mohammad used for the oil embargo declaration. Mohammad wanted to go home but the team demanded his cooperation at all costs, and even admitted that Hilda helped him out with political speeches to ensure that he acted professional even at 7 years of age. Mohammad did not want to talk and demanded the team to find the killer at once. Given Mohammad's unwillingness to talk to the team and helping the police with its inquiries, the team had to talk to Hilda to reason Mohammad, hoping that Mohammad will not do anything funny.

At the climax of the investigation, Hilda was revealed to be the one liable for the murder, even going far to lie to Mohammad to gain his trust. Mohammad then took some time to thank the team for putting Hilda in custody by International Authorities, and opted to sign some oil contracts before returning to Sultanistan to avert the oil embargo he proposed. Even though he now had to bear the burden of his father's duties too soon, he told the team that as he grew up, he would be a sensible head of state like his father was. 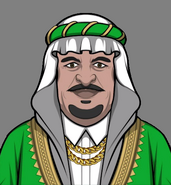 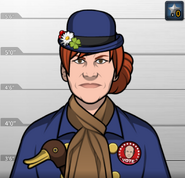 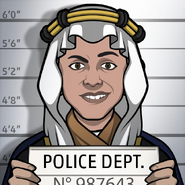 Retrieved from "https://criminalcasegame.fandom.com/wiki/Mohammad_Souleyman?oldid=473621"
Community content is available under CC-BY-SA unless otherwise noted.