Missy Benedict was a suspect in the murder investigation of teenager Cal Stark in Road to Nowhere (Case #39 of Pacific Bay).

Missy is a 19-year-old teenager with green eyes and red hair braided to the length of her chest. She wears a pink sweater with hearts over a green dress. She also wears a gold necklace and a pair of aviator sunglasses. It is known that Missy drives a pickup truck and eats barbecue sauce.

In the middle of Cal Stark's murder investigation, the PBPD team of Frank and the player found a collage at the Rhine Canyon lookout point bearing a handwritten message by Missy to Cal. During the resulting interrogation, Missy claimed that she and the victim were friends since school and that Cal always dreamed of living in Ivywood Hills one day.

Frank and the player later discovered a compact turntable during their second trip to the Rhine Canyon lookout point. Tech expert Hannah then analyzed the piece of evidence, only to discover that it had been used by Cal to communicate with aliens. The turntable also contained a conversation between Cal and Missy, who--per the recorded conversation--did not like the former's obsession with aliens. This finding prompted the team to call her into the interrogation once again. Missy stated that she wanted Cal to take her where he had seen the UFOs as she did not want to be left behind under any circumstances.

Missy was exonerated after she was found innocent at the climax of the case. 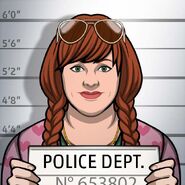 Retrieved from "https://criminalcasegame.fandom.com/wiki/Missy_Benedict?oldid=470224"
Community content is available under CC-BY-SA unless otherwise noted.