Miriam Georgia Young was a suspect in the murder investigations of young filmmaker Virginia Watchbird in The White Peaks Project (Case #29 of Pacific Bay) and urban legend hunter Roberto Vasquez in The End of the Night (Case #30 of Pacific Bay).

Miriam is the 55-year-old mother of Amy and Duncan Young. She has blue eyes and shoulder-length blonde hair swept down to her left shoulder. She sports a navy blue coat with hints of fur adorned with two pom-poms. She also dons a white sweater and shirt underneath the coat. For accessories, she wears a purple oversized glasses, a pair of irregular hoop earrings, and the same gold necklace her daughter has.

In her first appearance, it is known that Miriam eats pumpkin soup and takes sleeping pills.

In her second appearance, it is discovered that she likes riddles, smells of blackberries and uses snow chains.

Miriam made her first physical appearance after the team of Frank and the player found Miriam's letter to Virginia at the abandoned distillery in White Peaks. The nature of the clue made Frank deduce Miriam as a suspect due to her disapproval of Amy's friendship with Virginia.

Amy was surprised to see Frank and the player at her house, but Miriam told Amy to return to her room as she had no right to answer the door. Miriam was cold to the authorities but in turn Frank informed Miriam's beef with Virginia. Miriam harbored discontent due to her believing Virginia thought she had the right to bother the Youngs any time she wanted. Miriam believed Virginia to be a bad influence to Amy since Amy and Virginia were together as children. Frank was intimidated due to Miriam acting very cold, but vowed to continue the player's investigation in spite of her cold reception toward the team.

Miriam would have to put up with Frank and the player at her residence for a second time after the team found her bracelet at the cabin the Night Walker (a notorious "masked creature") lived a long time ago. Frank found it odd that Miriam would travel to the derelict cabin for something as this warranted another conversation with the elder Young.

Miriam was not happy when Frank and the player came to her house for a second time, but Frank simply asked her as to why she would travel to the derelict cabin. All Miriam wanted was a private discussion with Virginia in lieu of telling the victim to stay away from the Youngs, which Frank took as a threat to the victim. Ever since Amy came back to her hometown of White Peaks, Virginia, much to Miriam's disapproval, criticized the elder Young for being too harsh on the junior officer. Miriam made it clear that she has the right to treat her family the way she wants, making her a troublesome parent to the team.

Miriam was found innocent when Lola Dickinson was found guilty of grand homicide, but Duncan informed Frank and the player that Amy and Miriam got into a furious verbal fight, which caused the junior cop to take refuge with Allen Muir due to her mother's abuse towards her. After Frank and the player trailed Amy correctly, Amy told the player she wanted some time away after her nasty verbal argument. All Allen wanted to do was to cheer Amy up but the latter told the player Miriam has some nasty tricks to get under Amy's skin. Frank thus suggested the player talk some sense into Miriam just for the verbal fight.

Miriam told Amy to drop her temper tantrum, but Amy told her mother that thinking that Virginia was a "waste of space" was out of line. Miriam then told Amy that she was not fit to be in the player's police team, but Frank countered that Amy did a great job as a contributor to the player's team in spite of Miriam's reservations albeit she felt she had the right to say whatever she wanted, making the police label her as someone who was troublesome.

Moments after Amy and the player obtained results from Roxie about a frozen hand the player found in an ice cave in regards to the Night Walker's modus operandi by the telling of the icicle puncture on the hand, Miriam waltzed in the police station to lambaste Amy for her decision to treat Duncan as a suspect in Roberto's murder investigation. Miriam wanted to talk to both Amy and the player, so the discussion was moved into the interrogation room to know why she was upset.

Miriam was very upset that Amy made Duncan a suspect in Roberto's murder investigation, which she thought was disgraceful to her family. Amy told her mother that Duncan was questioned in a matter of routine and he had cooperated, but Miriam thought Amy and the player bullied Duncan since he had to move around in a wheelchair. Miriam provocated the player to treat her as a suspect since she tends to be very defensive of Duncan at times, but believed that Amy and the player treating Duncan as a suspect was likely going to be notarized by the press.

Miriam would be questioned as a suspect in proper routine after Yann analyzed the DNA of a burnt page from Roberto's notes during the second trip to the forest bridge. Amy thought that Miriam had a reason to burn a page out of Roberto's notes, so she accompanied the player as they headed to the interrogation room for a round with Miriam.

Miriam told the team she knew Roberto and burned his notes for a good reason, but Amy wanted to know as to why Miriam would do such a thing. Roberto was attempting to write a biography about Duncan, so Miriam agreed to help. She looked deep into the book about Duncan but when there were material regarding Duncan's accident that made him step down from the police, Miriam burned the book to cancel the project since she refused to let anyone defame her son. Miriam made it clear that Duncan must not be made aware of her burning Roberto's rough draft, and so she went back to her home to make dinner for her son.

Miriam would be held in the interrogation room again after her son was arrested not only for the murder of Roberto Vasquez, but also for committing a series of murders under the guise of the Night Walker. Amy would take a stand to put the law before family once and for all as she was not happy about Miriam not being present at Duncan's trial, but Miriam countered that Amy should be ashamed of herself for arresting Duncan for murder and obstruction of justice. Miriam now wanted the player to return to the ice cave to find Duncan's belongings so that she could have it back.

The player found Duncan's police bag in the ice cave and eventually found his diary inside it. Amy was shocked to know that Miriam would think of Duncan as a failure, but the player revealed Duncan's attempt to show her his true value—prompting Amy to suggest that Duncan was mad at Miriam for some reason. Amy had to give her mother Duncan's diary back and an explanation about Duncan's behavior in the interrogation room.

Miriam was confused as to why the player found Duncan's diary instead of Amy's, but the junior cop responded that she always brought her daughter down. Miriam worshipped Duncan as a hero and Amy as an inferior being, but Amy had enough of her mother's dwelling of the past. Amy felt Miriam destroyed Duncan's career due to a lack of love, and took a stand to disown her mother for mistreatment of Duncan which led to him committing crimes as the Night Walker. Amy thus made it clear that she would no longer need Miriam's approval to do things, and felt that she would only let the law tell her what to do, finally making things clear that she would now be her own person, and only her own. 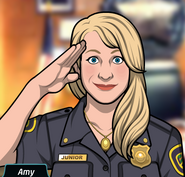 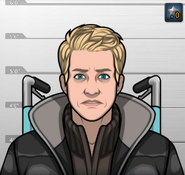 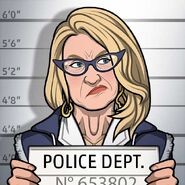 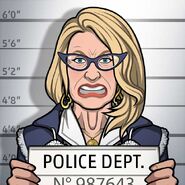 Retrieved from "https://criminalcasegame.fandom.com/wiki/Miriam_Young?oldid=458211"
Community content is available under CC-BY-SA unless otherwise noted.