Miranda Rousseau was a suspect in the murder investigation of her mother, village leader Evangeline Rousseau, in Shipwrecked! (Case #23 of Travel in Time).

Miranda is the 24-year-old daughter of the victim. She has long black hair and wears a dress made up of green leaves and yellow straw. Furthermore, she is seen adorning multiple pink and yellow flowers across her dress and hair. Additionally, she has freckles. It is known that Miranda drinks coconut water, knows how to make fire and has read The Tempest.

Miranda became a suspect after Zara and the player identified her as the victim's daughter. When Zara explained that the team had been shipwrecked, Miranda demanded that they told her everything about the real world. In order to stop her from rambling, Zara told her about the murder. Miranda broke down in tears and told the team that her mother was her rock on the island.

Miranda was spoken to again about her wedding rings. She revealed that her mother wanted her to get married as it was her moral obligation. However, she lacked matrimonial choices and was unwilling to marry anyone on the island. Zara then suggested that the murder was convenient for her, abhorring Miranda.

Miranda was found to be innocent after the team incarcerated Curly Stubbs for Evangeline's murder. At Curly's trial, Miranda questioned how he could kill her mother.

A few days later, Miranda (along with the rest of the island's inhabitants) was able to escape the island thanks to a flare gun left for them by the team, according to Quentin Montague. 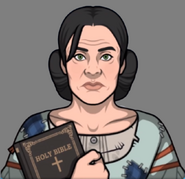 Retrieved from "https://criminalcasegame.fandom.com/wiki/Miranda_Rousseau?oldid=501307"
Community content is available under CC-BY-SA unless otherwise noted.