Miracle Girl was a suspect in the murder investigation of comic book artist Marcus Butler in Color Me Murdered (Case #22 of The Conspiracy).

Miracle Girl is a 28-year-old cosplayer who has brown hair in a braid and blue eyes. She wears a white, gold and blue and white star print superheroine suit. She also wears dark blue cuffs with gold linings, gold star earrings, a golden crown in her hair and light red lipstick. It is known that Miracle Girl went to GrimCon, drinks Incredible Bulk cocktails and takes vitamin D supplements.

Miracle Girl was spoken to again about the victim mocking her. She explained that she was excited to show Marcus her costume and transformation because he was the character's creator, but received negative feedback from him. Despite doing everything she could to prove that she could be Miracle Girl, nothing was good enough for him.

Miracle Girl was found to be innocent after the team incarcerated Haruki Kato for Marcus' murder. But she was later questioned regarding the disappearances of Carter Hayes and Olive Powell after Gloria and the player stumbled across her in the ruins. She told them that she had seen the children in the ruins, but they had ran off when she tried to return them to their families. She then suggested that they searched Marcus' studio because they had been talking about it. 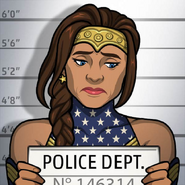 Retrieved from "https://criminalcasegame.fandom.com/wiki/Miracle_Girl?oldid=540975"
Community content is available under CC-BY-SA unless otherwise noted.