Mina is an 18-year-old high school graduate who became a vampire-kidnapping victim. She has blue eyes and long blonde hair tied back in a ponytail. She wears a blue denim jacket over a pink dress with white triangular designs. She also sports purple nail polish, a pair of gold earrings, a gold pendant around her neck and an iPear smartwatch around her left wrist. It is known that Mina is allergic to garlic.

In her quasi-suspect appearance, her hair is noticeably disheveled and she sports multiple soot stains on her face and body.

Mina was spoken to again about her aggressive cake depicting the victim with blood gushing out of her neck. She revealed that she had had a fight with Lucy over the latter's vampire obsession. She then told the team that she had heard that Lucy had actually been killed by a vampire from people at the club. Even though she told Lucy that she hoped she would get eaten by vampires, she did not mean it.

Mina was found to be innocent after the team incarcerated DJ Blood for Lucy's murder. Later, Priya told the player that she wanted to see how Mina was coping after her induction into the supernatural. They found Mina's phone at the Stone Giant; per Hope, they discovered that Mina had photographed a pair of glowing vampire eyes. Since they could not find Mina, this led the team to believe that she had been kidnapped by a vampire. Priya and the player spoke with US vampire coven leader Dr Aculus, who pledged to help the team find Mina.

At the end of the investigation, Hope traced Mina's smartwatch to a forest in Oregon, prompting the team to head to Oregon.

After arresting a bigfoot's killer, Gwen and the player searched the forest that Hope had traced Mina's smartwatch to. There, they found a torn piece of Mina's dress. They sent a sample from the scrap to Priya, who identified the substance as mostly Earl Grey tea. This prompted Gwen and the player to interrogate tea party-obsessed vampire Bathsheba, who pointed them in the direction of vampire Fabien de la Mort. Fabien claimed to nothing about the kidnapping and said that he found the swatch near a cave.

Later, Ben and the player searched for a geoelectrical probe in order to find the cave where Mina was being kept. After finding one, they sent it to Hope, who guided them to a specific cave. At the cave, Ben and the player found Mina, who had been tied up. After they freed her, she told the team that her kidnapper had glowing red eyes and had bitten her neck. She then revealed that her kidnapper had muttered something about "Black Ridge" and "virgin blood", before thanking the player for their help.

At the end of the investigation, Ben revealed to the team that Mina's captor had fed on her several times. However, they had not turned her into a vampire. He then revealed that Black Ridge was a ghost town in Nevada, giving the team their next location.

Mina's kidnapper was later revealed to be Eric Zwart, who was also the killer of Dr Aculus and was killed by Luke using a stake dipped in her blood. 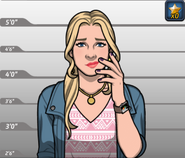 Mina, as she appeared in Blood Lust (Case #1 of Supernatural Investigations). 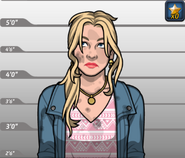 Mina, as she appeared in One Bigfoot in the Grave (Case #2 of Supernatural Investigations).
Add a photo to this gallery

Retrieved from "https://criminalcasegame.fandom.com/wiki/Mina_Reynolds?oldid=530726"
Community content is available under CC-BY-SA unless otherwise noted.