Mikhail Karamazov (Rus: Михаил Карамазов) was the victim in Only Truth Remains (Case #14 of World Edition).

Mikhail was a civil notary, responsible for finalizing legal documents. He had gray hair and green eyes. At the time of his death, he wore a gray suit and a yellow tie.

Mikhail was found on the Lermontov estate with a large wound on the back of his neck. According to Angela, he met his end due to blunt force trauma after being snuck up on from behind. She suggested Carmen and the player keep an eye out for a solid metal object with round edges, which she believed to be the potential murder weapon. She also found traces of key cleaner on the victim's shoulder, which meant the killer played piano.

After investigating the Bank Bridge once again, the team found a brass pestle covered in dried blood. Both Angela and her husband Lars confirmed it was the murder weapon. Plus, Lars managed to find traces of the killer's skin cells, revealing the killer had green eyes.

Billionare Dmitri Lermontov had bet his entire estate in a drunken state while gambling with Mikhail. Mikhail won by cheating, enraging Dmitri, who challenged him to a duel. As a result of winning the bet, Mikhail came to the estate and taunted caretaker Ivan Vysotsky, saying that he would kick him off. Duchess Anastasia had petitioned Mikhail to notarize papers proving her relation to the Russian royal family; Mikhail then threatened to tell people that she was a fraud if she did not marry him, but the (fake) Duchess insisted on her identity. Mikhail also refused to legalize Sveta Rasputina's permit so she could not be a legitimate psychic. Meanwhile, activist Agrafena Raskolnikova sent a virus through Mikhail's computer as a protest against him helping Russian senators draft a law granting the government rights to spy on citizens from space with impunity.

The killer turned out to be Dmitri.

Upon admitting to the murder, Dmitri said that he did not kill for the estate; he killed Mikhail after finding out that Mikhail was blackmailing Duchess Anastasia into marriage. As Dmitri was in love with Anastasia and wished no harm to befall her, he bashed Mikhail's head in with a brass pestle. Judge Adaku sentenced him to 25 years in prison. 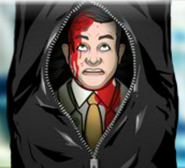 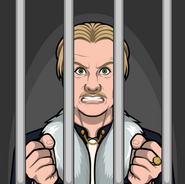 Dmitri Lermontov, Mikahil's killer.
Add a photo to this gallery

Retrieved from "https://criminalcasegame.fandom.com/wiki/Mikhail_Karamazov?oldid=475633"
Community content is available under CC-BY-SA unless otherwise noted.