Michael is a 23-year-old biology student with long brown hair. He has goggles sticking out of his hair, black glasses, and a bite mark on his neck. Michael wears a blue shirt with fish shaped white buttons. He wears a typically white lab coat with a badge on it saying "STUDENT" and the University logo on it. It is known that Michael chews bubble gum.

Michael was a Grimsborough University student who studied Biology and was working in the Biology Amphitheater. He was interrogated after Jones and the player found a fish encyclopedia in the Biology Amphitheater, about the piranha's feeding patterns of which he was in-charge. He told the team that he had called at the police station to report about his precious fish's theft but the man who answered the phone laughed at him. Jones then revealed to him that his piranha had killed Aaliyah, a second year student. After finding out, Michael got happy since he always believed that piranhas could eat a human being. He then told the team that he always said that piranhas were as dangerous as they said in the movies but everyone laughed at him.

Michael was interrogated once again when the team found a threat note in the Biology Amphitheater written by Aaliyah to him, in which she threatened to report Michael to the Dean if he did not stop what he was doing. Michael explained to the team that Aaliyah once came to see him at the end of a Biology lecture. She seemed fascinated by Michael's piranhas, so he told her how he had tried to feed them mammals, etc. Michael thought that the victim was fascinated by his piranhas, but he was wrong. After that day, Aaliyah kept coming to see Michael, demanding him to stop his experiments, but Michael did not listen to her and refused. Michael had become a prime suspect since the woman who wanted him to stop his experiments died under the teeth of his very own piranhas. However, in the end, Michael was proved innocent after Taylor Kirby was convicted for the murder.

Michael appeared for a short time during the third chapter of the case when the team found his piranha inside a metal box. They talked to each other for a short amount of time and Michael talked about Tess Goodwin and mentioned that he and Tess had met during one of their electronic studies classes, revealing that Tess had knowledge in electronics, which was one of the killer's profiles. 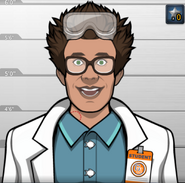 Michael, as he appeared in Spring Break Massacre (Case #38 of Grimsborough). 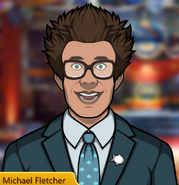 Michael, as he appeared in The Rorschach Reaper (Case #41 of Grimsborough). 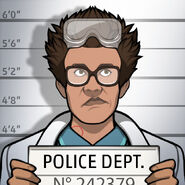 Retrieved from "https://criminalcasegame.fandom.com/wiki/Michael_Fletcher?oldid=533380"
Community content is available under CC-BY-SA unless otherwise noted.