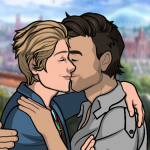 Helloooo XD I'm Hasuro Haku and nice to meet you :D If you need help or just simply...want to chat or something from me, you can message me below :D Have a nicee dayyyyy!!