Melvin "Merv" Waylon was the victim in Blood Diamond (Case #54 of Pacific Bay).

Merv was a local gun trader and con man. He had brown hair along with brown eyes covered with sunglasses. At the time of his death, he wore a dark blue suit, a light blue striped shirt, and a purple striped tie. He also sported a red pocket handkerchief in his suit breast pocket, and a golden pin the shape of a gun.

Merv was found at a motel pinned to the wall by knives. According to Roxie, before dying, Merv was tortured in numerous ways. Because of all the torturing he endured, Roxie came to the conclusion that he was not tortured at the motel, but she was not sure where either. For her, the cause of death was straightforward: Merv was perforated by six knives thrown from a distance. Two of them pinned him to the wall, and the last one struck his heart. Because of how well the knives were thrown, the team came to the conclusion that the killer properly knows how to throw knives.

Papa Quansah had bought Merv's guns in exchange for his country's diamonds. Merv gave him water pistols, hoping Papa would not check the shipment, but he did. Papa then asked for the diamonds back, but Merv refused to give it, even cutting off his own finger to keep the diamonds. Merv was Louis De Rico's "supplier" for lots of things, possibly even for his heist, although this was never confirmed. However, plans fell through when Merv could not keep quiet. Merv was also the first to tell Eugenia Hestentrope about the heist on her casino, but Eugenia distrusted him due to his criminal record, even refusing to allow him inside the casino, infuriating Merv. Merv had talked with Sheikh Faisal over the possibility of doing business with his country, but immediately detected that Faisal was an American con man because Merv was also a con man. Merv was using some of the money to finance his little sister, Mary-Lou Waylon, and her children, but he stopped paying her money, getting her into debt. Mary-Lou was Merv's benefactor after his death.

The killer turned out to be Faisal. 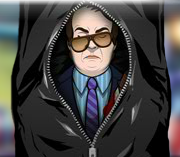 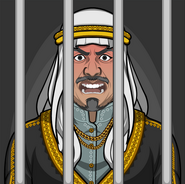 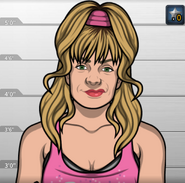 Mary-Lou Waylon, Merv's sister.
Add a photo to this gallery

Retrieved from "https://criminalcasegame.fandom.com/wiki/Merv_Waylon?oldid=469843"
Community content is available under CC-BY-SA unless otherwise noted.