Meredith Dernier was a suspect in the murder investigation of her sister, faded Ivywood star Celine Dernier, in Light My Fire (Case #29 of The Conspiracy).

Meredith is the 79-year-old sister of the victim. She has short, curly, gray hair and sports mauve lipstick and green eyeshadow. She wears a fuchsia cardigan over a green blouse and a matching bow. Additionally, she sports a pearl necklace, matching earrings, and a seashell and coral brooch on her left lapel. It is known that Meredith drinks absinthe, eats oysters and uses a salt scrub.

Meredith became a suspect after Gloria and the player found Celine's necklace and learned that she was the victim and Stella Dernier's sister. The team then met Meredith and talked to her about the death of her sister. After being informed of Celine's murder, Meredith still could not believe that her sister had just been dead. Meredith then said that with both of her sisters gone, she was alone in this world and she would probably follow them soon.

Meredith was spoken to again after the team found out that she was the one who slashed her sister's pet cushion with a knife. After Gloria asked her the reason why, Meredith answered that Celine was going to leave all her money to Plopsie, her pet dog, and cut her out of her will. Furious, Meredith called Plopsie a stinky mutt. She also told the team that she initially wanted to poison Plopsie and said that Plopsie was lucky to be alive.

Meredith was found to be innocent after the team incarcerated Cliff Montgomery for her sister's murder. 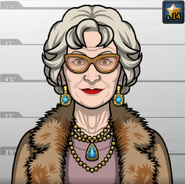 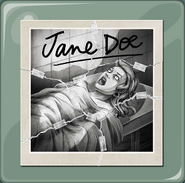 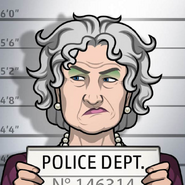 Retrieved from "https://criminalcasegame.fandom.com/wiki/Meredith_Dernier?oldid=417273"
Community content is available under CC-BY-SA unless otherwise noted.