Memphis Banach was a suspect in the murder investigation of her boyfriend, street racer Carlos Antonio, in Death on Wheels (Case #2 of Pacific Bay).

Memphis is a 19-year-old stripper with blonde hair, puffy pink cheeks and pink lipstick. She wears a light blue bra with several strings of threads under a translucent sky blue shirt and dark blue shorts. She has a dollar tucked under the right side of her bra. She sports blue eyeshadow, fake eyelashes, has a tattoo of a butterfly and some brambles as well as a dark bruise on her right and left shoulders respectively. It is known that Memphis knows car mechanics and smokes weed.

Memphis dropped out of high school at the age of 15 and found shelter in the street racing community, alas managed to operate as a stripper as of the conclusion of this case.

Frank and the player found a torn photo of Carlos and Memphis and pieced it back together at Derek Stone's flat, but Frank had no details about the blonde whom Carlos was holding on his right arm, grounds for the team to have Hannah digitally analyze the picture. At the conclusion of the digital analysis, Hannah identified the woman as Memphis, prompting Frank and the player to interrogate her.

Memphis told the team she met Carlos at a strip club. Carlos spent all his money on Memphis and showed her his ride, but at the danger of having too many rivals in the street racing circuit, in which Carlos claimed she would not understand.

Memphis had to put up a second discussion with the team when Frank and the player took a second look in Derek's flat and found a complaint document (which they pieced together) filled with nothing but legal language Frank did not understand, so he opted to have Hannah digitally analyzing those documents. After a careful examination, Hannah determined that Memphis was about to press charges against Carlos for assault and battery. Frank did not understand why it was torn in the first place. Memphis would not testify against Carlos in spite of Carlos's wife-beating antics, and even went so far as to claim Carlos was sweet because Carlos felt she should know how a car operated under the hood. Frank's gibberish angered Memphis, prompting the stripper to ask the team to leave.

Memphis was proven innocent of all charges, but the team needed to know about Memphis somewhat tending to Naomi Suzuki's wounds in the street following Shawn Bailey's indictment. 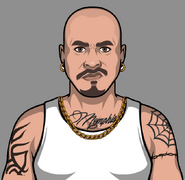 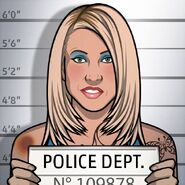 Promotional image for Death on Wheels.
Add a photo to this gallery

Retrieved from "https://criminalcasegame.fandom.com/wiki/Memphis_Banach?oldid=463881"
Community content is available under CC-BY-SA unless otherwise noted.