Deputy Mayor Melissa Roanhorse was a suspect in the murder investigation of spiritual healer Rainee Day in Bad Vibes (Case #6 of Supernatural Investigations).

Melissa is the 43-year-old Deputy Mayor of Saguaro, Arizona. She has brown eyes and black hair tied back in a ponytail. She wears a white top with purple and magenta floral designs under a gray blazer with a badge of Saguaro pinned to her left lapel. She also wears a dark gray skirt and a pair of pearl earrings. It is known that Melissa reads tarot cards, plays the Navajo flute and takes spirulina.

Melissa became a suspect after Gwen and the player found her phone and discovered that she had a meeting with the victim. She revealed that Rainee was supposed to meet with her regarding a permit to do an energy vortex session. She then claimed to not really know the victim, and then told the team that if anything came back to her, she would be in touch.

Mid-investigation, Melissa alerted the team to the fact that a crowd of hippies was trampling the crime scene.

Melissa was spoken to again about her fight with the victim. She told the team that she had warned Rainee about holding her healing sessions in tribal sacred space and that enough was enough.

Melissa was found to be innocent after the team incarcerated Jesse Adams for Rainee's murder. Gwen and the player handed Jesse over to Melissa, who sent him straight to jail. Later, Luke and the player questioned Melissa about the unexplained livestock deaths. She revealed that they had just had another report, up at Cathedral Rock. Luke and the player then went there in order to pick up the corpse. 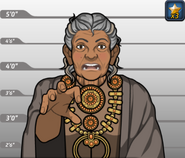 Haseya Roanhorse, Melissa's grandmother.
Add a photo to this gallery

Retrieved from "https://criminalcasegame.fandom.com/wiki/Melissa_Roanhorse?oldid=515660"
Community content is available under CC-BY-SA unless otherwise noted.