Megan Steel was a suspect in the murder investigation of astronaut Tom Nelson in Dead Space (Case #43 of Pacific Bay).

Megan Steel is a 42-year-old chief scientist at PASA and the supervisor of Tom Nelson with long blond hair tied in a ponytail and blue eyes. She wears a blue PASA uniform and has an earpiece on her right ear. It is known that Megan is right-handed, eats space food and knows astrophysics.

Megan was first interrogated after the team finished analyzing a USB key found on the crime scene that belonged to her. Hannah looked her up and found out she was supervising the victim Tom Nelson, as well as the expedition to Mars. When first interrogated, she refused to cooperate saying that she was not authorized to talk about the mission. When asked about the victim, she said that he was a great scientist but couldn't remember much about him or about how the USB key ended up on the crime scene.

After a second investigation of the training facility, the team managed to find a threat written to the victim by Megan. When confronted about this, she said that she was sick of Nelson's defiant behavior, such as stealing her space food. Megan was also receiving constant complaints from the army as well, with them and the police getting on her nerves, she became furious at the victim.

Megan was exonerated of murder suspicions after Brad Raybury was indicted for grand homicide and unauthorized use of military property. 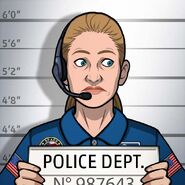 Retrieved from "https://criminalcasegame.fandom.com/wiki/Megan_Steel?oldid=437613"
Community content is available under CC-BY-SA unless otherwise noted.