Meera was a 25-year-old artist. She had short, wavy turquoise (naturally blonde) hair and sported black-rimmed glasses and a black hat. She wore a purple shirt with a sky blue front patterned with upside-down pink and purple triangles. Additionally, she donned a black tie, matching suspenders, and a silver lip piercing. It is known that Meera ate ginger, had a cat and consulted the I Ching.

At the time of her death, she wore a sky blue skintight shirt with purple epaulettes and black sleeves, and sported black pants with a purple lining.

After arresting Greg Gibbs's killer, Jones and the player encountered Meera at Walton Square, where she was taking photographs of the disaster. Jones then forced Meera to leave, telling her that the whole district could collapse at any moment.

After arresting Ronald Rooney's killer, Meera was confronted by Rupert and the player about art that she had stolen for a charity auction and replaced with her own. She revealed that she intended to have her work posted on social media to make herself known. Meera was then arrested and Rupert and the player left to recover the stolen art. Later, it was revealed that she had been bailed out of jail.

The Bloom of Doom

Meera became a suspect after Jones and the player discovered that she had created the murder weapon. Upon being told that her sculpture had been used to kill Valereea, she expressed excitement and said that it would gain her publicity. Jones then warned her that if she was the killer, they would put her in prison.

Meera was spoken to again about her attempts at destroying items at the junkyard by throwing them into a crevasse full of lava. She revealed that she wasn't trying to get rid of evidence, but was testing the effects of lava on toys. She then ranted about how the victim had obstructed her plans, and left to visit another crevasse for her research.

Meera was found to be innocent after the team incarcerated Sean Rubio for Valereea's murder. But she was later confronted by Gabriel and the player about photos she had taken of victims of the earthquake. She defended herself by saying that the photos were all for the sake of art, and that they would feed into her next big work. She then left to pick up her promotional materials at the art store, while Gabriel and the player rushed to the store to intercept her package.

Meera's body was found at her performance stage, locked in a cage and lowered into lava. Martine determined that the killer had knocked her out with a blow to the head, before trapping her in the cage and lowering her into the lava. She noted that the heat of the lava had melted some of the bars of the cage into her chest, where she found traces of capsaicin from chili peppers. This led Martine to conclude that the killer ate chili peppers.

Meera had angered some people with her art, including volcanologist Ruby Armstrong, whose traumatic earthquake experience had unknowingly been in one of Meera’s art pieces. Meera had also angered reformed mobster Tony Marconi with her art when she made a portrait of him that Tony hated. Meera had also insulted art collector Megu Hashira’s art, saying that she should have left the art to the artists and that she should just do what collectors did best, giving money. Meera had also gone on a professional red carpet date to the Transmutators 9 premiere with venture capitalist Christian Bateman and made horrifying art as a child, which made her mother Eleanor Abernathy want her daughter to confess to killing her cat for said art.

The killer turned out to be Christian.

Upon breaking down and admitting to the murder, Christian stated that he fell in love with Meera when they went to the red carpet as dates. When he confessed, however, she merely mocked him. Finally snapping after "denying him his last chance of feeling love", he went to see her set up her stage for her performance, knocked her out with a wrench, forced her into the cage, and dropped her into the lava when she woke up, taking pleasure at her screams of pain. Judge Powell sentenced him to life in prison, pending psychiatric evaluation. 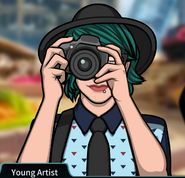 Meera, as she appeared in Flatline (Case #7 of The Conspiracy). 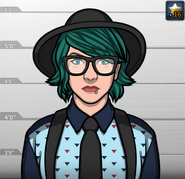 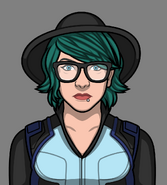 Meera, as she appeared in The Art of Murder (Case #12 of The Conspiracy). 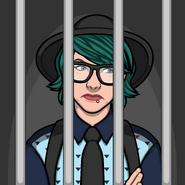 Meera, arrested for stealing artwork from a fundraising charity; she was later released, however. 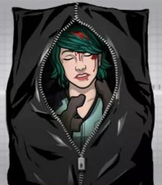 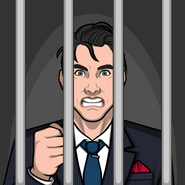 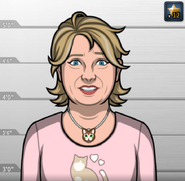 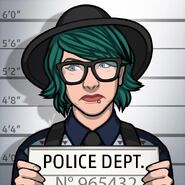 Retrieved from "https://criminalcasegame.fandom.com/wiki/Meera_Kat?oldid=548259"
Community content is available under CC-BY-SA unless otherwise noted.