Mbah Tirta was a suspect in the murder investigation of SOMBRA recruit Riaja Somalinggi in The Sweet Escape (Case #33 of World Edition).

Tirta is a 56-year old witch doctor. He has gray hair and beard, and a black blangkon wrapped around his head. He dons a burgundy striped batik with a tasbih necklace with tusks attached to it. He is seen holding a smoking pipe. It is known that Tirta plays Congklak.

Tirta was first interrogated after the player and Jack found one of his rings among the victim's belongings. He explained he was at the camp because he lived nearby. Tirta said the ring ended up in Riaja's backpack likely because he blessed it for her. When informed of Riaja's murder, he said it was unfortunate, but immediately went back to try to sell the team some spells, which Jack refused.

Tirta was interrogated again about a dagger covered in the victim's blood. He confessed that he performed an exorcism on Riaja, much to Jack's shock, because he felt she was possessed. He had been keeping an eye on the camp, felt something unnatural was going on, and spotted the victim running fast. She was also mistrustful, but Tirta managed to convince her that he was trustworthy. Although he performed the exorcism successfully, Tirta said it did not work as he could still see the victim's yellow eyes.

Tirta was found to be innocent after Maya Salim was incarcerated for Riaja's murder. 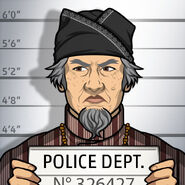 Retrieved from "https://criminalcasegame.fandom.com/wiki/Mbah_Tirta?oldid=415701"
Community content is available under CC-BY-SA unless otherwise noted.