Maylin Park (Krn: 박메이린) was a suspect in the murder investigations of her boyfriend, stripper Voodoo Vince, in Hot Mess (Case #11 of The Conspiracy), Grimsborough PD beat cop Mia Loukas in To Kingdom Come (Case #48 of The Conspiracy) and racer Jerry McKenzie in Dead Heat (Case #12 of Supernatural Investigations).

In her first appearance, Maylin is a 27-year-old car mechanic with black eyes and long brown hair with natural curls. She wears a red tank top with her bra exposed underneath. Additionally, she wears blue overalls with the right strap detached, and holds a dirty white rag in her right hand and a spanner in her left. Furthermore, she sports gold earrings and is seen covered in multiple oil and grease stains. It is known that Maylin dances the tango.

In her second appearance, it is discovered that she knows explosives.

In her third appearance, now 28 years old, it is revealed that she knows how to cast spells, drinks Rocket Cow and wears sunscreen.

Maylin was spoken to again about her pregnancy. She told them that she was pregnant with Vince's baby, and that she had forced him to choose between her and his job after she grew uncomfortable over the fact that women fawned over him all the time. She then lamented on the fact that her baby would have to grow up without a father.

Maylin was found to be innocent after the team incarcerated Nicolette Butler for Vince's murder. But she later spoke to Jones and the player about Zoe Kusama. She revealed that they were both in the Grimsborough Asian Women's Association and knew about her disappearance. She revealed that after their last GAWA meeting, Zoe had left her notebook behind. Jones and the player then re-investigated the garage to find Zoe's notebook, after Maylin gave them a refund for miscalculating the cost of repairs on their police car.

Maylin became a suspect a second time after finding her toolkit on the crime scene. Maylin said that she had dropped off the player's police car in the precinct for Mia, who had asked her to wax it as a favor to the player for lending the car. When Gloria and the player told her that the car had blown up with Mia inside it, Maylin lent her condolences and claimed that the car was in working condition when she had dropped it off.

The team talked to Maylin again after finding Mia's bill listing a lot of repairs for the car. Maylin said that she had lied as she did not want to speak ill of the dead. She then told the team that Mia had gone into a car accident and demanded that Maylin work all night to fix it as she did not want the player to find out that anything had gone wrong with the car. As a result, she had to hire a babysitter while she slaved all night on the car.

Maylin was found to be innocent after the team incarcerated Brock Perry for Mia's murder. Later, Maylin approached the team to ask for help in filing a restraining order against Christian Bateman, who had harassed her in the café. Gloria and the player then assigned some cops in the precinct to assist her while they checked the footage of Bateman's harassment.

Maylin became a suspect for the third time after Luke and the player discovered that she had inspected the victim's car before his crash. She told the team that she had accidentally tossed out the safety check, but assured them that everything on the vehicle was in great working condition. She then told the team that someone could have accessed the car as the doors were always unlocked, but she could not have imagined anyone having a grudge against Jerry.

Maylin was spoken to again about her spell book. She confessed to the team that she dabbled in white magic, revealing that she had started learning mysticism in order to cope with her move from Grimsborough to Utah with her daughter. When Luke asked her if she practiced in the garage, she assured them that she never did anything with malice.

Maylin was found to be innocent for the third time after the team incarcerated Ralph McKenzie for Jerry's murder. Later, Luke and the player asked Maylin if they could borrow a car for an amateur race at Bonneville. She told them that she had a car available to lend to them, but she needed their help in fixing the broken exhaust. After the player reassembled the exhaust manifold, they brought it to Maylin, who installed the part. She then confirmed that the car was race-ready and told them to talk to racer Lily Karam so that she could register Luke. 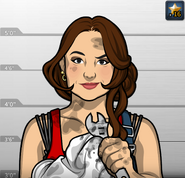 Maylin, as she appeared in Hot Mess (Case #11 of The Conspiracy). 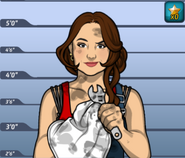 Maylin, as she appeared in To Kingdom Come (Case #48 of The Conspiracy). 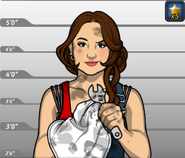 Maylin, as she appeared in Dead Heat (Case #12 of Supernatural Investigations). 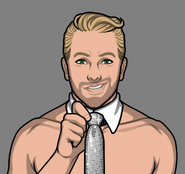 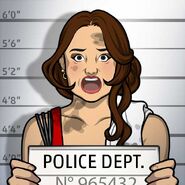 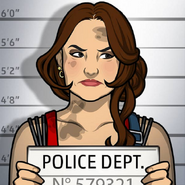 Retrieved from "https://criminalcasegame.fandom.com/wiki/Maylin_Park?oldid=519917"
Community content is available under CC-BY-SA unless otherwise noted.