Mauro Massetti was the killer of distiller Davy Byrne in Blue Blazes (Case #21 of Mysteries of the Past).

Mauro is a 42-year-old baker. He has short black hair and sports a white hat with a black stripe. He wears a white shirt and a black half coat with a blue stain on it. It is known that Mauro smokes cigarettes, goes to horse races and reads Pistols and Petticoats.

Mauro became a suspect after a photo of him was found in the victim's distillery. When asked to explain how his photo ended up in an Irish distillery, he claimed not to know of any Irish. He joked about his photo being found and about the victim but stopped when informed of the murder. He was unsettled upon hearing of Davy's death even if he did not know him.

Mauro was spoken to again after his threatening note to the victim was found. Mauro had wanted some alcohol from the victim, who he heard made moonshine but he refused to negotiate with Mauro because he was Italian. Mauro thought that he could make a deal with the victim despite him being a typical gangster but was proven wrong.

In the end, Mauro was revealed to be Davy's killer. After denying involvement, Mauro admitted to the crime. Upon his arrival in Concordia, Mauro lent money to Davy, who promised to pay him back when he could. When Mauro went to collect, Davy refused. Feeling fooled, he doused Davy with moonshine and set him ablaze with his cigarette. Judge Lawson sentenced him to 25 years in jail. 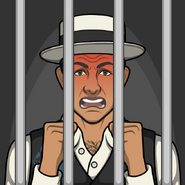 Mauro, sentenced to 25 years in prison for the murder of Davy Byrne. 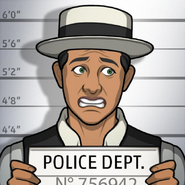 Retrieved from "https://criminalcasegame.fandom.com/wiki/Mauro_Massetti?oldid=516628"
Community content is available under CC-BY-SA unless otherwise noted.