Matt Barry was the killer of teenager Rosa Wolf in The Death of Rosa Wolf (Case #1 of Grimsborough).

Matt is a 24-year-old football player with brown eyes and brown hair flattened back by a blue cap. He is seen wearing a matching football shirt with the number "9" on it. It is known that Matt is right-handed.

Matt was the killer of a teenager named Rosa Wolf. He slashed Rosa's throat and left her body at the entrance of Grimsborough. The reason behind Matt killing Rosa was never stated and he was given an automatic lifetime jail sentence upon arrest—without intervention from Judge Hall. 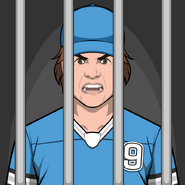 Matt, sentenced to an undisclosed amount of time in jail for the murder of Rosa Wolf. 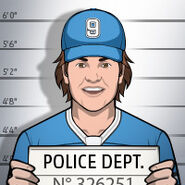 Retrieved from "https://criminalcasegame.fandom.com/wiki/Matt_Barry?oldid=498549"
Community content is available under CC-BY-SA unless otherwise noted.