Captain Mary Read was a suspect in the murder investigations of three people in Travel in Time. She also made a minor appearance in Shipwrecked! (Case #23 of Travel in Time).

Mary is a 31-year-old pirate-turned-captain of the Black Sparrow. She has blue eyes and shoulder-length wavy brown hair. She wears a white open-buttoned shirt under a maroon waistcoat, a brown belt and a dark turquoise jacket with ochre collars and gold buttons. She also sports lipstick, a tricorne hat that matches her jacket and a gold hoop earring in her right ear. Furthermore, she is seen holding a gold and silver cutlass in her bandaged right hand.

In her first suspect appearance, it is known that Mary drinks rum, plays Liar's Dice and sings sea shanties.

In her second suspect appearance, it is discovered that she eats hardtack, uses citronella oil and is superstitious.

In her third suspect appearance, the wound on her hand has healed. It is revealed that she knows explosives, speaks French and takes laudanum.

Mary became a suspect after Jack and the player found a wanted poster of her. Jack asked her about her rivalry with Blackbeard to which she said that, although they were adversaries, nobody deserved to be poisoned by a coward. She then said that Blackbeard had dozens of enemies and commiserated the fact that she would never have the honor of defeating him in battle.

Mid-investigation, Zara informed the team that Mary was fighting with crewman Rags and that they were about to kill each other. At the scene, Jack and the player learned that they were fighting over who was going to be the new captain of the Black Sparrow. Jack broke the fight apart and warned them to stay off the ship until their investigation was over.

Mary was found to be innocent after the team incarcerated Lincoln Matuszak for Blackbeard's murder. Later, Orlando and the player sought to find the Black Sparrow's ownership deed so that they could identify the ship's new captain. From the deed, Orlando and Penelope identified Mary as the new captain. Orlando and the player approached Mary to inform her about the news. She said that she was honored to accept the position and asked the team if they could find her some whiskey so that the Black Sparrow's crew would be more receptive to the news.

After Orlando and the player found some whiskey, they accompanied Mary to inform Rags of her new command. Mary declared a truce and informed him that she was the new captain of the Black Sparrow. Despite being shocked, Rags accepted the news and gladly took the whiskey. He then welcomed Mary aboard the ship.

After arresting Evangeline Rousseau's killer, the team hailed a ship using Kai's makeshift flare gun. To their dismay, the ship's captain was time machine saboteur Ammon Bast. Fortunately for the team, Mary and the crew of the Black Sparrow arrived to defend the team from Ammon. Ammon's henchmen then surrounded the crew, prompting Mary to order the team to retreat to her ship.

Mary took the team aboard the Black Sparrow as payback for them helping her procure the ship. She then overheard the team talking about Zara's curse after she touched Blackbeard's treasure. She told them that she knew someone living on Skull Island who could break the spell, prompting the team to make a detour to the island.

After the Black Sparrow moored at Skull Island, Mary tried to introduce Zara and the player to the voodoo priestess. However, the priestess' apprentice, Agwé, informed them that the priestess had entered a holy trance and would only awaken in three days. Two days later, Mary informed the team that Agwé had been murdered.

Mary became a suspect again after Jack and the player found the body. Mary explained that she had found the body when she went to stretch her legs on the beach. She feared that if someone on her ship was responsible for the crime, it would bring bad luck on all of them. She then implored the team to solve the murder without awakening the priestess.

Mary was spoken to again about the victim having Blackbeard's hat. She revealed that she had seen Agwé sneak onto the ship. Wondering what he was doing, she followed him, but forgot all about him when she knocked over her citronella oil, prompting her to clean it up. When she returned to her cabin, she noticed that Blackbeard's hat was missing, making her realize that Agwé had stolen it.

Mary was found to be innocent again after the team incarcerated Jorge de la Cruz for Agwé's murder. Mary dismissed Jorge from her crew and sentenced him to stay on the island for the voodoo gods to punish him how they saw fit.

Later, the player accompanied Penelope as she interviewed Mary. Mary told her that the most important thing to become a pirate was to never worry about what the future might bring and to hold your course. She then explained that the best way to learn that was to pick a fight with someone. Taking Mary's advice, Penelope smashed a jade statuette, not realizing that it was shopkeeper Derek Trollope's most valuable ware. Penelope then took it upon herself to restore the statuette.

After the team finished all of their events on Skull Island, Mary and the team set sail for Tortuga for the auction.

Mary became a suspect for the third time after Jack and the player found her portrait in the victim's bedchamber. She claimed not to know who the victim was and suggested that he was a fan of hers. She then excused herself to run the Black Sparrow.

Mary was spoken to again about her threat to the victim. She revealed that she paid Pelletier a visit to influence him in the team's favor. However, when she approached him, he got so scared that she had to give him laudanum. After she left, he broke his portrait of her as she did not live up to his dreams.

Mary was found to be innocent for the third time after the team incarcerated Simone Severine for Pelletier's murder. After the arrest, Isadora Haddonfield told Zara and the player that Mary had been arrested. After they found proof that could free Mary, the three of them proceeded to free her from jail. She thanked the player and spoke to Isadora about her joining her crew. 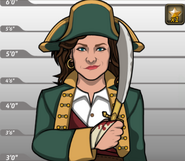 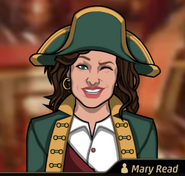 Mary, as she appeared in Shipwrecked! (Case #23 of Travel in Time). 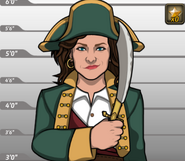 Mary, as she appeared in Going Once, Going Twice, Dead! (Case #25 of Travel in Time). 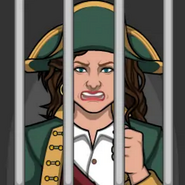 Mary, arrested by the Tortugan authorities for piracy, however she was later released.
Add a photo to this gallery

Retrieved from "https://criminalcasegame.fandom.com/wiki/Mary_Read?oldid=500595"
Community content is available under CC-BY-SA unless otherwise noted.