Mary-Lou Waylon was a suspect in the murder investigation of her brother, gun dealer Merv Waylon, in Blood Diamond (Case #54 of Pacific Bay).

Mary-Lou is a 39-year-old woman who is the sister to Merv Waylon. She has long blonde hair and wears a pink tank top. It is known that Mary-Lou plays blackjack and listens to country music.

Mary-Lou was first interrogated after Amy and the player identified her on a picture of her and the victim. She was sad to hear of her brother's death saying he was the only decent guy in her life. When asked about how Merv made his money, she said she did not ask too many questions because the victim had a temper.

She was spoken to again after the team found an eviction notice saying she did not pay her rent. She said she got evicted because her brother stopped giving her money. She tried turning to blackjack, but all that did was get her deep with a loan shark. When Amy asked if she got to inherit Merv's money now that he was dead, she said she would and that she would not have any more problems.

Mary-Lou was found to be innocent after the team incarcerated Sheikh Faisal for killing Merv. 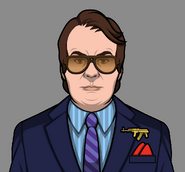 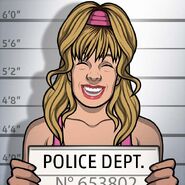 Retrieved from "https://criminalcasegame.fandom.com/wiki/Mary-Lou_Waylon?oldid=413638"
Community content is available under CC-BY-SA unless otherwise noted.