Marvin is a 39-year-old security guard. He has curly brown hair and a mole above his mouth. He dons a yellow ochre coat with some designs over a buttoned white shirt with a brown brooch. He is also seen carrying a gun underneath his coat.

In his first appearance, he sustains a sunburn on his face, and it is known that Marvin rides horses and eats beef jerky.

In his second appearance, his sunburn has healed and it is discovered that he is right-handed, reads the Concordian Gazette and takes a sleeping draught.

Marvin became a suspect after the player and Isaac found his name in a Bible at the crime scene. He was shocked to hear of Vittorio's murder, saying he and the victim had been life long friends ever since they were kids. And although Isaac and the player wanted to find his killer, Marvin did not want them snooping around the house, and in Vittorio's business.

Marvin was spoken to again about a letter he wrote to the victim criticizing the way he treated his "famiglia". He said that despite being friends, the victim was always bossing people around, acting like a kingpin. When he accepted working for him, Marvin was under the assumption he would be a partner, but it made him furious that he was treated like some random thug. But Vittorio was still family to him, and he claimed he did not kill Vittorio.

Later on, Marvin approached the team with Seamus O'Neill, saying he caught him running around. Before Marvin could do anything, Isaac told him to stop, and he agreed and left the team with another warning.

Marvin was found to be innocent after the team incarcerated Seamus for Vittorio's murder. Later on, Maddie and the player spoke with him again about the whereabouts of Giulietta Capecchi and Franca Capecchi, having found the former's note to Seamus saying she and her mom would get revenge on the Irish. Though he was leaving himself, he did not know where Giulietta or Franca went. He did leave them with a warning, "once Franca gets through with the Irish, the river will have so many bodies between its banks, you'll be able to walk across." With that in mind, Maddie suspected they were heading to Crimson Banks, and went to report their findings.

Marvin became a suspect again after Isaac and the player found his comb outside the police armory where the raid took place. He said he knew nothing of the raid, and was at the station earlier for a littering offense, and claimed he dropped his comb then. Though Isaac was sure he was a part of the gang, Marvin said he had no answers for him and left shortly thereafter.

Marvin was interrogated again about his fingerprints found on an enveloped filled with money given to the victim. Despite the evidence, he denied giving the money to the victim. Even with the prints, he claimed they could not determine when they were put there, and told them not to jump to conclusions.

In the end, Marvin was found innocent after the team incarcerated Wilbur Owens for Edna's murder. But the player and Rose went to arrest him after he attempted to kill Diego, who discovered that Marvin was a part of the raid. He was mad that Diego was not killed, and even though he was arrested, he told the team they would live to regret it. 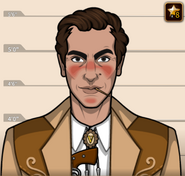 Marvin, as he appeared in How the East Was Won (Case #30 of Mysteries of the Past). 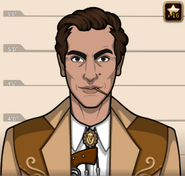 Marvin, as he appeared in Stick to Your Guns (Case #34 of Mysteries of the Past). 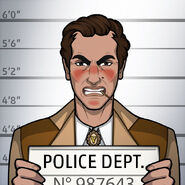 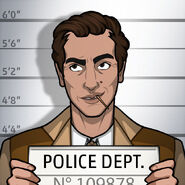 Retrieved from "https://criminalcasegame.fandom.com/wiki/Marvin_Ferrari?oldid=529931"
Community content is available under CC-BY-SA unless otherwise noted.